Music written and performed by Kenyatta Emmanuel, Robbie Pollock, and Isaias Umali III of the Freedom Trap, poetry by Ian Manuel, and artwork by persons on Death Row at San Quentin State Prison in California.

After a brief period of Reconstruction following the Civil War (1866-1877), the conservative white supremacist forces in this country began to rebuild, brick-by-brick, a social system of racial hierarchy and oppression comparable to American slavery during the antebellum period.

The main device—the very mortar that would hold together that new system of racial oppression—was the penal law and its strict enforcement. New criminal codes, resurrected from the antebellum era, placed onerous duties and harsh punishments on freed Black women and men. These infamous “Black Codes” criminalized ordinary conduct, under pretextual vagrancy and public disorder rationales, and meted out even harsher penalties with dire consequences for the civil and political rights of those who got trapped in the new web of racial injustice.

The penal law, law enforcement—in sum, law-and-order became the main tool to return the country to a system of racial apartheid, first de jure during the Jim Crow era and now de facto with racialized mass policing and incarceration. The penal law was deployed as a political strategy and key device to entrench racial hierarchy in this country—in effect, to return the country to an antebellum caste society. The harsher punishment of African-Americans ensured that they were stripped of their homes and taken out of the labor market, that they forfeited their property, could not work, and became once again free labor. The prison sentences stoked a new system of convict leasing that re-enslaved Black men and women. The criminal records served to disenfranchise swaths of freed African-Americans from the vote and strip them of any civil or political rights.  The sprawling Black prisons were turned into plantations, literally, such as in Louisiana with the Angola plantation prison known colloquially as “The Farm.” Lynching mobs, in tandem with law enforcement, brought forms of terror that sent wave upon wave of Black men, women, and children fleeing their homes, abandoning their property, to find refuge in only slightly less threatening jurisdictions. The penal law and its enforcement were the lynchpin to dispossess freed Black women and men of their property and of any gains they had achieved with Emancipation.

We can trace a direct lineage from those penal practices to today’s policing and punishing. In fact, sometimes, we can even trace the legal precedent directly back to the law of slavery. From street stop-and-frisks and “broken-windows” policing, to juvenile supervision and detention, to charging decisions and cash bail, to prison time and parole revocation and felon disenfranchisement—at every step of the way, the law is enforced in a disproportionately harsher way against persons of color today. Criminal law enforcement has created a caste society in America. Our jails and prisons are filled with poor persons of color. Our courtrooms are color coded. As the Sentencing Project reports to the United Nations: “The United States in effect operates two distinct criminal justice systems: one for wealthy people and another for poor people and people of color. You walk into misdemeanor arraignments in most counties in this country only to find a procession of young Black men in jumpsuits, jangling in chains, secured to each other at the wrists and ankles—a sight that resembles more the unloading of a slave ship after the Middle Passage than anything that could possibly be called justice or even law. The experience is utterly horrifying—but eerily reminiscent—to anyone who has even one iota of a sense of justice.

Still today—with police killings of unarmed Black and Latinx women and men, with blatant racial profiling and grossly disproportionate policing and enforcement in African-American communities (85% of stops-and-frisks in New York City were of persons of color), with a capital punishment system in this country that is multiple times more likely to sentence someone to death based on skin color—we live in a time still today in which the practices and institutions of the penal law serve as the glue, the mortar that keeps together our system of racial hierarchy.

W.E.B. Du Bois’s words ring today as true as they did in 1935. As Du Bois wrote, in his landmark study, Black Reconstruction: “The whole criminal system came to be used as a method of keeping Negroes at work and intimidating them. Consequently, there began to be a demand for jails and penitentiaries beyond the natural demand due to the rise of crime.”

Yes, Du Bois identified the continuity from chattel slavery to the criminal justice system, already in the 1930s, even before we began to cage millions of African-Americans in jails and prisons. Du Bois revealed to us the deep continuities from the logics of slavery to the practice of racial hierarchy postbellum. Du Bois analyzed convict leasing and showed how it promoted the logics of slavery and extractive capitalism. “The horrid system of convict leasing,” Du Bois wrote, “gave to the state a profit in crime, not to mention the vast profits which came to the private contractors.”

Angela Davis developed this brilliantly in the 1970s. Davis noted, in fact, in her letter from Marin County Jail in May 1971, an increasing awareness of this among Black and Latino prisoners themselves. “Prisoners — especially blacks, Chicanos and Puerto Ricans — are increasingly advancing the proposition that they are political prisoners. They contend that they are political prisoners in the sense that they are largely the victims of an oppressive politico-economic order, swiftly becoming conscious of the causes underlying their victimization.”

The collective Critical Resistance, and Rachel Herzing and the other founders and members, identified this early on as well. Ruth Wilson Gilmore, Mariame Kaba, Dorothy Roberts, Amna Akbar, Allegra McLeod, and other brilliant critical thinkers have been brilliantly analyzing, documenting, exposing this history tirelessly.

This evening, with the launch of this seminar, we follow in their footsteps, we read their work, we try to trace with them, to understand, to highlight the genealogy of our racial caste society, and to analyze how it ties back, precisely, to the unfinished struggle for the abolition of slavery.

In this sense, we return to W.E.B. Du Bois’s brilliant idea of “abolition democracy,” which he coined in that landmark study, Black Reconstruction in America (1935). As Angela Davis explains in her own collection of that name:

“DuBois argued that the abolition of slavery was accomplished only in the negative sense. In order to achieve the comprehensive abolition of slavery—after the institution was rendered illegal and black people were released from their chains—new institutions should have been created to incorporate black people into the social order. […] Slavery could not be truly abolished until people were provided with the economic means for their subsistence. They also needed access to educational institutions and needed to claim voting and other political rights, a process that had begun, but remained incomplete during the short period of radical reconstruction that ended in 1877. DuBois thus argued that a host of democratic institutions are needed to dully achieve abolition—thus abolition democracy.”

Our abolitionist efforts today—whether they target the police, prisons, capital punishment, or more broadly our punitive society—have to be understood through this perspective: the dark legacy and long history of the still uncompleted abolition of slavery.

Abolition today is a constructive project. As Dorothy Roberts writes in Abolition Constitutionalism, “We should understand abolition not as the ‘elimination of anything but . . . as the founding of a new society.’” And in the same way, “The relationship between prison abolition and the Constitution, then, should be seen less as the condemnation of our existing abolition constitutionalism and more as the genesis of a new one.”

Our title, “Abolition 13/13” for short, indexes the fuller title of this seminar series: “Abolition Democracy 13/13” 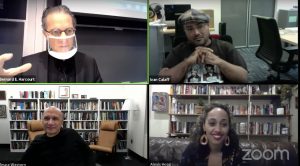 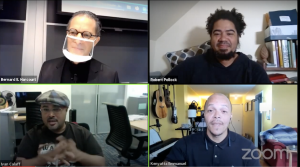