The seminar opens with a spoken word performance by the artist and activist Tymber Hudson followed by Professors Dorothy Roberts and Bernard E. Harcourt

“Prison, Foster Care, and the Systemic Punishment of Black Mothers” by Dorothy Roberts

In the first chapter of his autobiography, Malcom X describes in searing terms the destruction of his own family—how he and all his siblings were taken from his mother; how he eventually was sent to home detention, and then a reformatory school; how his mom would be civilly committed for 26 years in an asylum. In the culminating paragraph, Malcolm X writes:

I truly believe that if ever a state social agency destroyed a family, it destroyed ours. We wanted and tried to stay together. Our home didn’t have to be destroyed. But the Welfare, the courts, and their doctor, gave us the one-two-three punch. And ours was not he only case of this kind.

All of this, Malcom X writes, “didn’t have to be,” but it did “because of a society’s failure, hypocrisy, greed, and lack of mercy and compassion.”

A society’s failure, hypocrisy, greed, and lack of mercy and compassion: that is a telling—and accurate—indictment. There is the economic dimension of greed, the way in which we prefer today to invest in private mechanisms to foster children rather than in the families themselves. There is the raw mercilessness of tearing families apart. There is the hypocrisy of supposedly caring about some harms but not others. And there is the utter failure, the scars and trauma that are inflicted on so many. Perhaps the only dimension that Malcolm X need not have added, as it is woven through his autobiography, is the brutal racism of the entire process.

Of the many scholars who study the child welfare ordeal in this country, none surpass Dorothy Roberts in the breadth, scope, and brilliance of her work. Now completing a new book calling for the abolition of family policing, Professor Roberts joins us at Abolition Democracy 10/13 to discuss what she calls the “family regulation system” … and its abolition

[For the full introduction, read here] 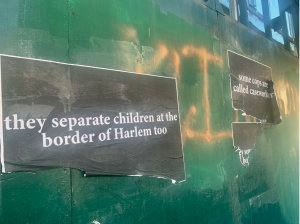