Down to Earth: Politics in the New Climatic Regime, by Bruno Latour

“Gas Guzzling Gaia, or: A Prehistory of Climate Change Denialism” by Leah Aronowsky

“The struggle to abolish oil must join forces with other abolition struggles: namely, those aimed at policing and prisons. Abolishing oil requires fighting fossil capital; which in turn requires rolling back the repressive force of the state which protects fossil capital’s investments.”

–  Alyssa Battistoni, On the Politics of Oil Abolition.

“Abolition democracy establishes a benchmark for the Green New Deal.”

“A more nuanced understandings of breathing [includes] the Black Lives Matter movement in the U.S. (#icantbreathe), nuclear colonialism and the effects on breathing for indigenous populations, contaminated air and toxicity as a result of recycling plants, the burning of e-waste in South India, lead smelting and gas leaks in Los Angeles and New Jersey, the relation between breathing and energy justice…”

Abolition Democracy is inextricably linked to the struggle against global climate change.

The last New Deal, in the 1930s, demonstrated the failures of a collective enterprise that exploited racial injustice—a vast governmental initiative of extraordinary infrastructural construction and social programs of housing and employment that was made possible by leveraging the racial cleavages in this country and playing into the hands of Southern segregationists, who directed all the social benefits to their white constituencies, rather than uniting and uplifting communities of different colors in a joint enterprise.

And now we have guides to help us rethink how:

The remarkable work of Alyssa Battistoni and her colleagues, Kate Aronoff, Daniel Aldana Cohen, and Thea Riofrancos, in their book A Planet to Win: Why We Need a Green New Deal (Verso 2019), as well as the brilliant essay by Alyssa Battisoni “On the Politics of Oil Abolition.”

The rich essay by Reinhold Martin, Abolish Oil, in which he directly ties the struggle against climate change to W.E.B. Du Bois’s formulation of the idea of abolition democracy in order to push the Green New Deal further along both dimensions of climate change and racial justice, and socialize energy infrastructures.

The remarkable explorations of Daniela Gandorfer and her colleagues at the Logische Phantasie Lab of all the dimensions of the harrowing expression “I can’t breathe.”

And the many resources and the powerful activism that they point us to in their work.

Andreas Malm’s recent polemic, How to Blow Up a Pipeline.

The Red Nation’s Red Deal, that militates for an integrated view of social transformation that simultaneously attacks the effects of colonialism and of extractive capitalism:

The Red Deal is a platform that calls for demilitarization, police and prison abolition, abolishing ICE, tearing down all border walls, Indigenous liberation, decolonization, land restoration, treaty rights, free healthcare, free education, free housing, full citizenship, equal protection for undocumented relatives, a complete moratorium on oil, gas, coal, and carbon extraction and emissions, a transition to an economy that benefits everyone and that ends the exploitation of the Global South and Indigenous nations for resources, safe and free public transportation, restoration of Indigenous agriculture, food sovereignty; restoration of watersheds and waterways, denuclearization; Black self-determination and autonomy, gender and sexual equality, Two-Spirit, trans*, and queer liberation, and the restoration of sacred sites. (11)

The question now is “how.”

How do we work together to fight global climate change while creating racial justice and a just society?

We open our public seminar with a performance of traditional Lakota singing and drumming by Red Rock Perkins, John Eagle Shield Jr., Kendall Little Owl, and Spencer Little Owl of the Iron Bull Singers and a brief discussion of the CCCCT’s Standing Rock Litigation with lead attorney Noah Smith-Drelich

“We call for a divestment away from police, prisons, military, and fossil fuels (four of the biggest drains on public spending) and reinvestment in common humanity for everyone, including health, dignity, and wellbeing, as well as the restoration of Indigenous lands, waters, airs, and nations.” 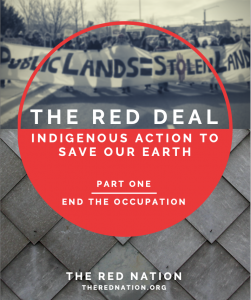