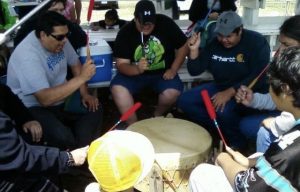 From Iron Bull: Iron Bull was started in the early 90’s by our father Orville Little Owl. The name Iron Bull came from his mother Josephine Iron Bull from the Cannonball area on Standing Rock. The drum group originally was started and travelled around the California area and later on to the Midwest. The drum group carries many songs from the Standing rock and MHA nations. Since Orvilles passing in 2006 his sons Kendall and Spencer Little Owl have been carrying on the family drum name, they have met numerous of friends and now brothers along the pow wow trail.