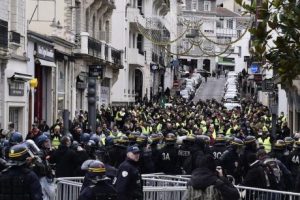 Photo caption: This protest was organized by yellow vests and movements against G7 in Biarritz, December 18, 2018, where France hosts the next G7 Summit in August. Photomobile/ Press Association. All rights reserved

By Étienne Balibar, published at Open Democracy on December 20, 2018

So the President has spoken. But to whom? That is the first question to be asked. Without ever trying or daring to name those who forced him into this – the famous gilets jaunes – he spoke words of contrition in homoeopathic doses, and, as the press immediately pointed out, ‘granted’ measures to reduce the financial burden on the poorest part of the population but ‘without conceding’ anything that would have marked a change of course, or satisfied the movement of revolt that has so deeply shaken the country over the last four weeks.

It will become clear in the coming days who has gained exactly what, both immediately and in the longer term, and who can be satisfied with it. Once again, Macron promised that citizens would have their say in a ‘consultation’ of national scope, in which he would contact local elected officials himself. And he seasoned his speech with two elements that should cause great concern to all democrats. First, a long proclamation of severity against ‘disorder and anarchy’ – ‘I have given the government the most rigorous instructions’ – meaning that demonstrations are placed under a kind of preventive state of emergency and that police brutality will not be subject to any restrictions. Then a strong return of the theme of national identity, of nauseating memory, immediately translated into the ‘question of immigration’, a ‘question’ that has played no role in the recent movement, but whose resonances on the right and far right of the political spectrum are well known….