NB: The first 6:24 minutes of the seminar video has feedback that we are working to eliminate. Apologies for the inconvenience.

“Marginalia to Theory and Praxis” by Theodor W. Adorno

One Dimensional Man: Studies in the Ideology of Advanced Industrial Society (part III) by Herbert Marcuse, and

Down to Earth: Politics in the New Climatic Regime by Bruno Latour

at the Institute for Social Research in Frankfurt

The student revolts of the late 1960s and 1970s brought to a head the tension within the Frankfurt School over the relationship between theory and practice. Two starkly opposed positions emerged, represented on the one hand by Herbert Marcuse and on the other by Theodor Adorno.

The students and Marcuse advocated for the “unity” of theory and practice. “The petrification of Marxian theory violates the very principle which the New Left proclaims,” Marcuse wrote in his Counterrevolution and Revolt in 1972: “the unity of theory and practice.” (34) As Marcuse explained, “A theory which has not caught up with the practice of capitalism cannot possibly guide the practice aiming at the abolition of capitalism.” (277)

By contrast, confronted with student protest, Adorno seemed to retreat to theory, debunking the calls for praxis. “Whenever I have directly intervened in a narrow sense and with a visible practical influence, it happened only through theory,” Adorno emphasized in his “Marginalia to Theory and Praxis” in 1968-69. (277)

Join us at the Institute for Social Research in Frankfurt this Wednesday, Dec. 19th, at 6pm Frankfurt time/12 noon New York time, for a discussion that will begin with Adorno and Marcuse, but then turn to Bruno Latour’s new book, Down to Earth: Politics in the New Climatic Regime (Polity 2018). 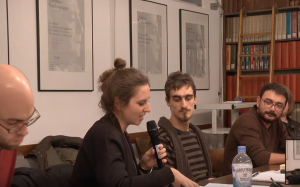