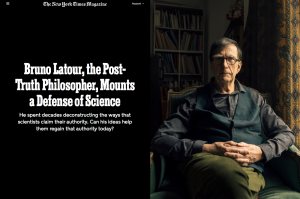 In the summer of 1996, during an international anthropology conference in southeastern Brazil, Bruno Latour, France’s most famous and misunderstood philosopher, was approached by an anxious-looking developmental psychologist. The psychologist had a delicate question, and for this reason he requested that Latour meet him in a secluded spot — beside a lake at the Swiss-style resort where they were staying. Removing from his pocket a piece of paper on which he’d scribbled some notes, the psychologist hesitated before asking, “Do you believe in reality?”

For a moment, Latour thought he was being set up for a joke. His early work, it was true, had done more than that of any other living thinker to unsettle the traditional understanding of how we acquire knowledge of what’s real. It had long been taken for granted, for example, that scientific facts and entities, like cells and quarks and prions, existed “out there” in the world before they were discovered by scientists. Latour turned this notion on its head. In a series of controversial books in the 1970s and 1980s, he argued that scientific facts should instead be seen as a product of scientific inquiry. Facts, Latour said, were “networked”; they stood or fell not on the strength of their inherent veracity but on the strength of the institutions and practices that produced them and made them intelligible. If this network broke down, the facts would go with them.

Still, Latour had never seen himself as doing anything so radical, or absurd, as calling into question the existence of reality. As a founder of the new academic discipline of science and technology studies, or S.T.S., Latour regarded himself and his colleagues as allies of science. Of course he believed in reality, he told the psychologist, convinced that the conversation was in jest. From the look of relief on the man’s face, however, Latour realized that the question had been posed in earnest. “I had to switch interpretations fast enough to comprehend both the monster he was seeing me as,” he later wrote of the encounter, “and his touching openness of mind in daring to address such a monster privately. It must have taken courage for him to meet with one of these creatures that threatened, in his view, the whole establishment of science.”

To continue reading Ava Kofman’s essay on Bruno Latour and review of his new book Down to Earth (that we will be reading and discussing), click here.