Bernie Sanders’ Guide to Political Revolution and Indivisible: A Practical Guide for Resisting the Trump Agenda by Indivisible with

Bernie Sanders appropriates the term “political revolution.” That is significant in and of itself. The meaning of the term “revolution” has undergone change over time, and, in its modern usage, connotes “social” as opposed to merely “political” revolution: as Hannah Arendt and Reinhardt Koselleck showed us—and as we studied in Uprising 1/13—the modern conception of revolution is associated with a social transformation that goes beyond political change: it is about social change, about in Koselleck’s words “the social emancipation of all men, [about] transforming the social structure.”

In this light, Sanders’ appropriation of the qualifying term “political” is informed, astute, and strategic. His intervention focuses us back on the political—almost as if Sanders is shedding his earlier socialist identity to assume the more contemporary democratic socialist identity. The shift from “revolution” to “political revolution” normalizes his political position, putting it more in line with democratic activism in both small and big D.

The reform agenda that Sanders sets out in his Guide to Political Revolution is nevertheless radical—and with the exception of nationalized industry, satisfies most of the social aspirations of the utopian socialist state. It’s possible that Sanders’ program is even more audacious than that of, say, former Socialist president François Hollande of France. But at the same time, as Amna Akbar discusses, it is far more conventional than so many of the activist agendas today–reflecting, more than anything, the chasm between materialist socialist programs and more radical abolitionist politics today.

From a critical perspective, one of the most fascinating dimensions of Sanders’ book is that he does not really deploy notions of ideology or false consciousness. Throughout the narrative, Sanders emphasizes that we basically all know what is going on. There are no illusions. There is no need to lift a veil. Everybody knows and understands the way that the political system favors and subsidizes large corporations. “Americans see that there are different rules for the rich and powerful than for everyone else.” (60, emphasis added)

Throughout the Guide, Sanders underscores that we all essentially know what is going on. In that sense, there is practically no need for critique. No need to lift the veil. All that we need to do is to mobilize in the face of these injustices.

Sanders is cognizant of the paradoxes of capitalism, and he exposes them at every turn: the system actually underwrites large corporations—Walmart, for instance, which does not pay its workers a living way, meaning that the taxpayers have to support them with food stamps and subsidized housing. (8-9) Sanders describes the fraud and misrepresentation of large banks. (57-58) He is relentless in showing the lie of advanced capitalism. We know these truths.

The only thing missing, then, is for citizens to mobilize and do what is necessary. Sanders dedicates his book to “the younger generation,” encouraging them to convert their “idealism and generosity of spirit into political activity,” and acknowledging that only they will be able to “create a lot better world than the one my generation left you.” (Dedication).

The message is clear: we know what is wrong, all we need to do is act. Perhaps, then, it is not critique that is necessary now, but rather the impetus to action. What might this tell us about the relationship between critique and praxis? That is a good place to start this seminar. 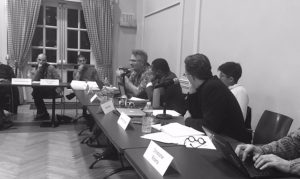