Commonwealth and Assembly by Michael Hardt and Antonio Negri

with special emphasis on Preface and Chapter 1.1: “The Republic of Property” , 6.2 “Insurrectional Intersections” and 6.3 “Governing the Revolution” of Commonwealth
Chapter 6 “How to Open Property to the Common” of Assembly

“The Common” takes us back to the material roots of praxis—to Marx, to capital, to private property, to the idea of the common. It does so, though, by once more flipping the master on his head. The return to political economy here places the law of private property at the very heart of the analysis. Law, rather than being merely superstructural and epiphenomenal, moves center stage—and not any kind of law, not the usual public or constitutional law, but private law, the law of private property and of commercial transactions.

In turning to the work of Michael Hardt and Antonio Negri in Praxis 5/13, we thus make a double move: first, one might say, from Giorgio Agamben back to Marx, but second and more importantly, from Marx forward to Critical Legal Studies and beyond. In effect, in this seminar, we turn to the praxis of legal transformation or revolution.

In Praxis 5/13, we will be jumping into what is really the fourth iteration in a complex debate that has been going on now for several decades between, on the one hand, advocates of “the common,” such as Hardt & Negri or Dardot & Laval, who come to the question of the common from a communalist or communist political theoretic background, and, on the other hand, leftist critical legal scholars who, from the American Legal Realism of the 1920s to the Critical Legal Studies movement of the 1970s and beyond, have sought to reconstruct property relations from within law along more egalitarian dimensions.

For our purposes, the first salvo in the debate was Hardt & Negri’s 2009 book, Commonwealth, where they spell out a notion of “the common” drawing predominantly on early modern conceptions of the law of private property—from Grotius and Locke. They argue there for a notion of the common that differs from both private property and public property in that it, by contrast to those other two forms, does not figure predominantly within the realm of the legal tradition. “The common is that which is not property,” Hardt states; in other words, the common is the negative of property as “monopoly over use,” implying equal access; and the negative of property as “monopoly over decision-making,” implying democratic decision-making, democratic management. (Let me emphasize the singular use of “the common” here, we are discussing the concept of the shared use of goods under democratic decision-making, not the metaphor of the public commons).

After the publication of their book, Hardt & Negri were confronted by critical legal scholars, especially Duncan Kennedy, for having failed to engage more contemporary understandings of the law of property—property not as a substantive thing, but as a bundle of rights, as Hohfeld and the realists and critical legal scholars established in their tradition of leftist internal critique of law. Kennedy accused Hardt of both a conceptual error, not to think of property as a substance or single thing, but as a bundle of rights that pertains to many or allows for different non-exclusivity rules; and also of a political error:  progressive legal theory and action must work from within property law to advance certain rights over others. The struggle against property, Kennedy argued, is naïve and counter-productive. Instead, we need to reform from within.

And so, in their more recent book, Assembly, from 2017, Hardt & Negri respond to critical legal scholars and reformulate somewhat their proposal for the common—which may not differ that much from the original version except to address specifically the question of the internal and the external of the law. The fastest way to bring you up to speed on all this is to listen to Hardt’s lecture here.

As Hardt & Negri make clear in Assembly, and as Hardt explains, their conception of the common remains beyond property, “only one step further of the bundle of rights theory”; but they emphasize that any notion of the common must propose ways of managing the common goods: there must be democratic mechanisms for determining its use—which would be a form of regulation. So the common remains fully regulated, but regulated through democratic forms—democratic management, rather than in a monopolistic manner. Open and equal access, and democratic decision making—as we saw at Zuccotti Park. Examples of the common include the sharing of music, and creative production; resistance to patents and copyrights; the metropolis as a common space, thus neither private property, nor public property.

It is about here that we are in the debate, including the important passages in Commonwealth on institutions and institutional design that Camille Robcis discusses in her essay.

To help us address these questions, we are delighted to receive a remarkable panel of brilliant critical theorists at Praxis 5/13: Étienne Balibar of Columbia University, Camille Robcis of Columbia University, and Mikhaïl Xifaras of Sciences Po, Paris, in conversation with Katharina Pistor, Camila Vergara, Daniele Lorenzini, and others.

Let’s turn now first to Mikhaïl Xifaras, second to Etienne Balibar, and then to Camille Robcis! 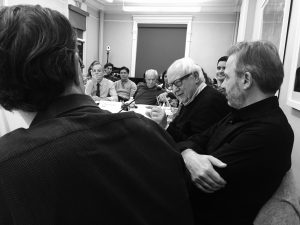