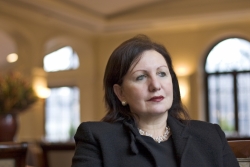 Seyla Benhabib, born in Istanbul, Turkey, is the Eugene Meyer Professor of Political Science and Philosophy at Yale University and was Director of its Program in Ethics, Politics and Economics from 2002 to 2008. She was the President of the Eastern Division of the American Philosophical Association in 2006-07 and has been a member of the American Academy of Arts and Sciences since 1995.  She has previously taught at the New School for Social Research and Harvard Universities, where she was Professor of Government from 1993-2000 and Chair of Harvard’s Program on Social Studies from 1996-2000.