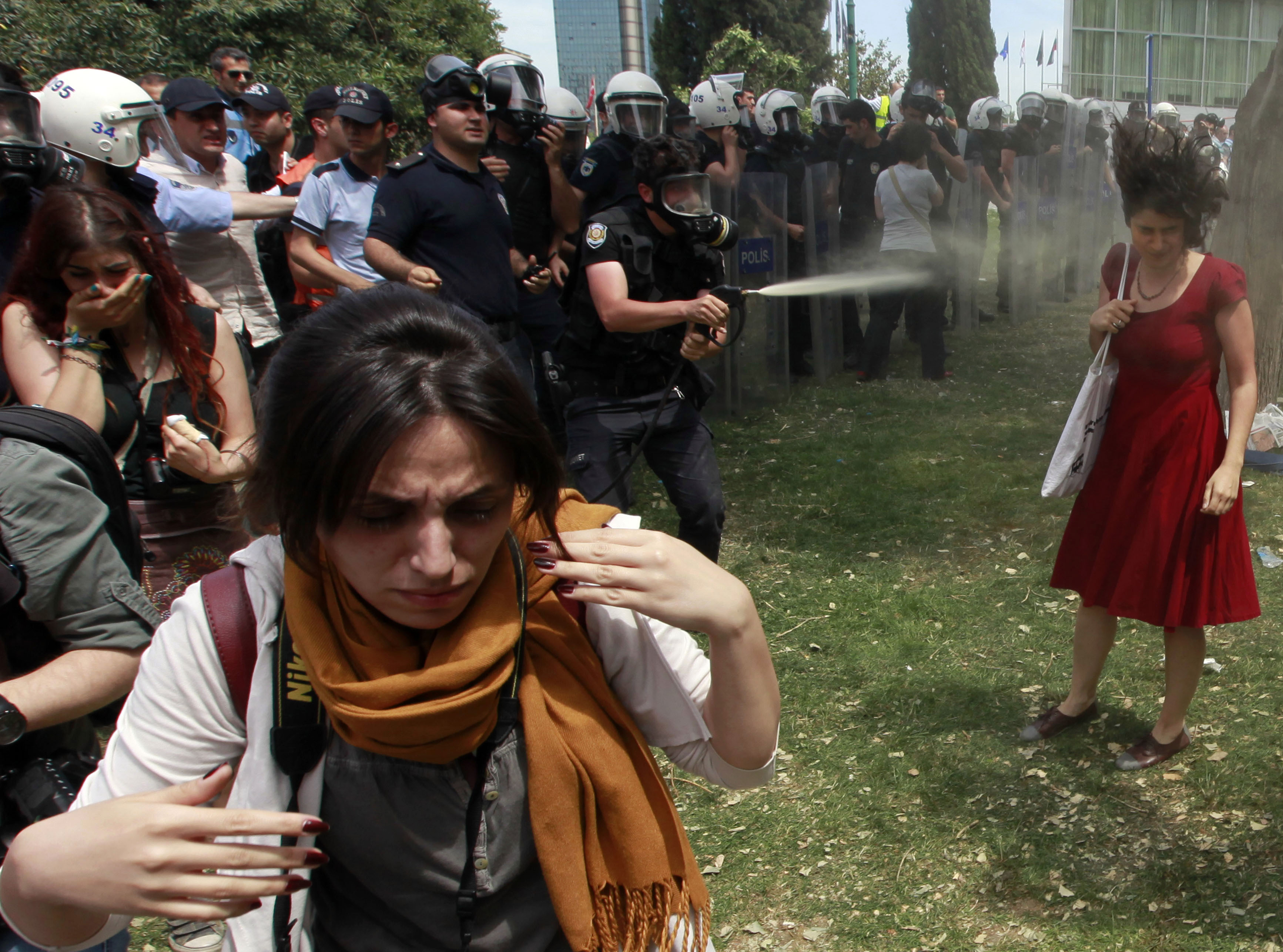 A Turkish riot policeman uses tear gas as people protest against the destruction of trees in a park brought about by a pedestrian project, in Taksim Square in central Istanbul May 28, 2013. REUTERS/Osman Orsal

At the beginning of her Notes Toward a Performative Theory of Assembly, Judith Butler tells us that she wrote these essays in the midst of the massive popular uprisings at the start of our decade. We are discussing them at a very different moment.

In the early 2010’s, marches and gatherings in Cairo’s Tahrir Square, Wall Street’s Zuccotti Park, Istanbul’s Gezi Park, Madrid’s Plaza Mayor, as well as other sites of mobilization against precarity and for justice across the globe, reaffirmed the importance of the presence of bodies on the street and in the square as powerful instruments of the public performance of protest.  This was a prolonged moment of transnational contagion of memes, tactics and strategies, disseminated in the media and on the internet. The citing, recuperation, and remixing of protest tactics in different locations inspired solidarity and ideological connectivity across time and space, enlarging the circle of the “we” that, in Butler’s view, is produced in and through these embodied forms of assembly. For Butler, that “we” is inflected by a form of vulnerability that, whether shared or differentially imposed, is a condition of embodiment.

Even in the midst of this global moment inspiring hope and promising progressive transformation, Butler recognizes another kind of embodied assembly when she gives us the example of the “shout of joy” that “rippled through the crowd” of the meeting of the Tea Party when Congressman Ron Paul suggested that health care should be denied to those who could not afford to pay for it (p. 12).  That affective ripple also creates an embodied “we” – one that is increasingly and confidently taking to the streets now in extreme right-wing populist mobilizations performing white supremacy, xenophobia, racism, sexism and homophobia, from Charlottesville to Paris Sao Paolo, and elsewhere. Bodies, in all of these cases, share the street and the square. Their demands might be different, even radically divergent but, in participating in similar forms of public assembly, are they also subject to similar forms of vulnerability? To put it slightly differently, are bodies, when they assemble in the street, vulnerable in similar ways, even if they are not equally vulnerable?

In the context of our seminar on “Critique and Praxis: What is to be done?,” I would suggest that, in this volume, Butler proposes that praxis as a mode of ethical and political being, in the sense that Bernard has outlined it, demands a particular attention to the body and an embrace of vulnerability as a form of social relation. What do the body and what does vulnerability, differentially understood, add to our ongoing discussions?

I believe that the extreme right-wing assemblies of our current moment – some of which have taken Butler herself and what they refer to as the “theory of gender” themselves as their specific target — enable us both to confirm and to qualify Butler’s insights into the workings of bodily vulnerability in practices of resistance, specifically their gendered qualities.  Some public assemblies not only use the body’s needs for support and infrastructure as a platform of demand but also, necessarily, risk bodily exposure to harm in the practice of making these demands.  These mobilizations against precarity start with vulnerability and acknowledge its effects, using it as a space of potential intersubjectivity and connection.  But other protests, populist right wing ones right now, mobilize vulnerability in the interest of overcoming it by wielding weapons, building walls, and enforcing borders. Invoking vulnerability to attack, terrorism, atomic threat, natural disaster, and crime contributes to a crisis mentality that can always be activated for political purposes, as we can see every time we step into an airport and dutifully take off our shoes, contest gun ownership, or “security” walls on contested borders. An aspiration to invulnerability, or inviolablity, like an aspiration to autonomy, can elicit a defensiveness and disavowal that shut down debate and silence dissent. Although these masculinist discourses of defense and denial are distinctly gendered and culturally marked, it is particularly among feminists that their purchase is being contested. Claiming a disproportionate vulnerability for women, or for any socially disadvantaged group, brings with it a plea for protection that potentially signals weakness and a perpetuation of disempowerment.

When the feminist legal scholar Martha Fineman and her colleagues adopted the notion of vulnerability for their initiative at Emory Law School, jettisoning the idea of “dependency” that Fineman had worked with previously, they wanted to counteract U.S. liberal and neo-liberal ideas of autonomy, self-reliance and equality.[3] They aimed to create a space for a political discourse of interdependence and care in which active state intervention in human communities would not be seen as exceptional.  The Emory group contests popular conceptions of vulnerability as a condition of weakness, victimhood or stigma. Vulnerability, they claim, outlines our sometimes necessary reliance on social institutions that can enhance resilience and reduce susceptibility to injury.  Butler also espouses interdependency and insists on the relational rather than ontological dimensions of vulnerability, dimensions, I would add, that must also acknowledge intra-group differences of power and privilege.  Vulnerability, in this reading, is not injurability, but a form of embodied social relation that can be invoked in the effort to redefine individual and group dependence on economic and political support structures. An embrace and a practice of vulnerability in the performance of protest, and the production of a “we” as a product of public assembly also mean the embrace of surprise, of the unforeseen. If we think of vulnerability as a radical openness toward unexpected outcomes, then we might be able to engage it more creatively – as a space to work from and not only as something to be overcome. Such an openness offers an invitation to act without knowing the consequences or results in advance.

Butler makes this argument from the space of the body – a body that, in a rethinking from her earlier work, is more explicitly material and subject to material circumstances.  I find this elaboration very moving: “The body is exposed, to history, to precarity, and to force, but also to what is unbidden and felicitous, like passion and love, or sudden friendship or sudden and unexpected loss. … vulnerability denotes some dimension of what cannot be foreseen or predicted or controlled in advance, and that might be a stray comment that comes your way by someone who happens to be riding the same bus as you, or a sudden loss of friendship, or the brutal obliteration of a life by bombing. These are not the same, but as creatures who are open to what happens, we can perhaps be said to be vulnerable to what happens when what happens is not always knowable in advance. Vulnerability implicates us in what is beyond us yet part of us, constituting one central dimension of what might tentatively be called our embodiment” (pp. 148,9).

How can we practice such an embodied openness to surprise and to possibility? And how can vulnerability offer a way to coalition rather than competition and conflict?

In my own work on literature and the arts, I have suggested that we might begin by considering the forms of responsiveness and vulnerability fostered by aesthetic encounters. Aesthetic encounters can effect what Butler discusses as the “regulation of the senses” in which our bodies share the experiences of other bodies.  They can elicit a sense of vulnerability that can move us toward an ethics and a politics of open-endedness, attuning us to the needs of the present, to the potentialities for change, and to the future. In our acts of reading, looking and listening we necessarily allow ourselves to be vulnerable as we practice openness, interconnection, and imagination, and as we acknowledge our own implication and complicity.  Aesthetic works, moreover, whether visual, literary, acoustic or performatic, can enable us to reflect on the vulnerabilities they elicit within us.

I’d like to elaborate these thoughts further during our meeting on Wednesday by discussing some performances of protest in the form of urban intervention. See, for example, the 2013 work of Chilean performance artist and scholar Maria José Contreras, “#quererNOver.”

Looking forward to our discussion at 11/13.