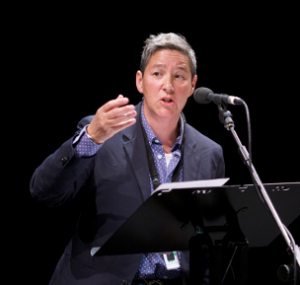 Jack Halberstam is a Professor of English and Women’s Studies in the English Department and the Institute for Research on Women, Gender, and Sexuality  at Columbia University. Halberstam is the author of books including: Skin Shows: Gothic Horror and the Technology of Monsters (Duke UP, 1995), Female Masculinity (Duke UP, 1998), In A Queer Time and Place (NYU Press, 2005), The Queer Art of Failure (Duke UP, 2011) and Gaga Feminism: Sex, Gender, and the End of Normal (Beacon Press, 2012) and has written articles that have appeared in numerous journals, magazines and collections. Halberstam has co-edited a number of anthologies including Posthuman Bodies with Ira Livingston (Indiana University Press, 1995) and a special issue of Social Text with Jose Munoz and David Eng titled “What’s Queer About Queer Studies Now?” Jack is a popular speaker and gives lectures around the country and internationally every year. Lecture topics include: queer failure, sex and media, subcultures, visual culture, gender variance, popular film, animation. Halberstam is currently working on several projects including a book titled WILD THING on queer anarchy, performance and protest culture, the visual representation of anarchy and the intersections between animality, the human and the environment. In 2018, Halberstam published the book Trans*: A Quick and Quirky Account of Gender Variability.