“Physically removing leftists has gained so much traction because the idea is instinctively both logical and appealing. The means of physically removing leftists, however, is not as simple. While throwing commies from helicopters à la Pinochet has become the alt-right’s favorite policy proposal, this is clearly an inefficient solution. The Pinochet regime only executed 120 communists in this manner, and we are faced with many thousands of times this number. […] Physical removal and the restoration of order is possible within the bounds of the Constitution.” 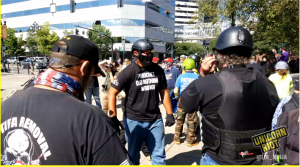 Here are some notes on the Alt-Right readings we have for Praxis 4/13, starting with the Swedish Alt-Right writings of Daniel Friberg, The Real Right Returns: A Handbook for the True Opposition(2015)

It is curious to read, on the very second page of Friberg’s 2015 book, that “the Frankfurt School and its concept of Critical Theory” are responsible for the decline of Western civilization. Friberg argues that the problems he identifies are not the product simply of leftist politicians and leftist policies; but the result instead of a deeper ideological transformation and the production of a new cultural hegemony. This was accomplished, he says, by the cultural and ideological take-over of the principal institutions of society—namely, “the media, cultural institutions, and educational systems.” (5) These are the institutions that “shape people’s thoughts and opinions.” (5)

Friberg refers to all this as “metapolitics” and attributes the idea to Gramsci: “metapolitics can be defined as the process of disseminating and anchoring a particular set of cultural ideas, attitudes, and values in a society, which eventually leads to deeper political change.” (4; see also 95). In other words, ideas precede action. Friberg is an idealist—a critical idealist. In this, he explicitly follows Gramsci. Power rests on ideology and ideas, not on force. The key is to control the ideology and “public discourse” and “how language was used” (23). Listen to him, channeling Gramsci approvingly:

“One must first win the consent of the people by enshrining particular concepts in intellectual discourse, mores, habits of thought, value systems, art, and education.” (23-24).

The references to discourse and language is remarkable here. And it is instrumentalized in Friberg’s text: “Any parliamentary struggle,” he writes, “must be preceded, legitimized, and supported by a metapolitical struggle. Metapolitics, at its best, reduces parliamentarism to a question of mere formalities.” (20)

Friberg in fact borrows the “conditions of possibility” language of the critical theoretic tradition influenced by Kant. He borrows the idea that practices themselves rest on epistemological ground, such that certain actions will not even make sense barring conceptual groundwork. He writes, signaling the notion of “conditions of possibility,” that the main point “is ultimately to redefine the conditions under which politics is conceived.” (4) Therefore, “metapolitical analysis must precede political action.” (21)

It may be useful to identify what Friberg considers as positive ideals:

By contrast, the negatives that Friberg identifies include:

“Jews, homosexuals, Muslims, or other minorities” (10) constitute, in Friberg’s view, groups that are indifferent to the interests of “Europe’s native populations” (9) and “traditional European values.” (10) It’s important to emphasize these dichotomies. For Friberg, there is an essential difference in interests of, on the one hand, white European-born heterosexual Christian populations and others. Friberg warns against blatant racism against those others, but warns against anti-racism as giving in too much to some kind of “a reckless hatred for Europe and her history.” (10; see also 66) The essence of this position can be captured best reading carefully this following passage by Friberg:

Manic hatred of Jews, homosexuals, Muslims, or other minorities is clearly irrational, and it cannot lead to a positive political project. Nevertheless, what Europe needs today is a Right which looks toward her owninterests, not toward those who would turn her into a tool of groups which are, at best, indifferent to her future. (10)

It is worth parsing that paragraph out closely: those identified minority groups have different sets of interests than “Europe” (which stands in for white hetero Christian populations). It does not make sense, as a matter of public relations, to vilify those minority groups; but it is important to emphasize that they are have opposing interests and as such, are enemies.

Gender is primordial. Friberg writes about the Left’s “feminised minions” (15). Leftist men are “spoiled and feminised” (55). What the Right needs now are “real men.” (53) Those, however, are hard to find, he tells us, because “The deconstruction of the European male has been an important element in—and in fact a prerequisite for—the Left’s project of destruction.” (53) Women, on the other hand, “do constitute the ‘weaker sex,’” and “are in need of protection.” (56) As such, they do not need to attend to the struggle for Europe and should instead tend to the family and children.

Friberg is clear about traditional gender roles, and that gender differences are “fundamental, deeply rooted, and comprehensive” (52). He goes after “gender studies” with vitriol, calling it “ridiculous pseudoscience” (53) that “aims to create an atrophied human being who is dependent on neutered academics for his or her value system.” (54)

Men must learn martial arts, weight lift, and prepare to defend their families with violence if necessary, Friberg writes (54-55). By contrast, women should have children and raise them, Friberg writes, and tend to the family hearth. His advice to women is simple: “In your autumn years, having a successful career behind you will be nothing compared to having a large family, with grandchildren and everything else that comes with it.” (59)

There is a strong biological Darwinian strand in Friberg. He speaks of the importance of “passing your genes on” (59). He explicitly mentions “the rather brutal competition which constitutes natural selection.” (60) “When you eventually find yourself on your deathbed, your sons and daughters will carry your heritage within them. The more carriers Europe has, the better.” (57) Friberg is worried about white European population growth and in fact instructs his readers to “Make sure to have at least three children” (60).

An interesting side note on “rights.” In the context of gender identity, Friberg warns against adopting the language of “men’s rights.” He writes: “do not, under any circumstances, refer to yourself as a ‘men’s rights activist.’ Doing so signals weakness, and also lacks any logical basis. Any such ‘rights’ are myths, and rank alongside the rest of the Leftists ideological debris.” (55) What does he mean by that idea of “myths”? I think he is referring to the model of legal liberalism and the idea of civil rights. He does not believe that men have rights, he believes in the naturalness of male identity. In other words, masculinity is not something that needs to be protected with rights, it needs to be reasserted in all its naturalness—which involves physical strength, fighting power, and what he calls “gentlemanly virtues” (55).

Gender is not about rights, which are constructed. It is about nature. We each have a “naturally given gender role,” Friberg writes, and a “natural role in society and the community” (61). This is about nature, not about positive, human-made, legal rights.

Note also that Friberg defines “biopolitics” in his glossary as “a term coined by Foucault” and seems to indicate both an understanding of the term and a distaste for biolpolitics at least in the context of state public health projects (69).

“And now: what is to be done? […] We have to prepare ourselves for the coming tempest, to harden ourselves—for the sake of attacking, like a cobra, quickly and decisively, once the moment of opportunity strikes. In anticipating this moment, we need now to start arming ourselves—mentally and physically—we need to recruit, to proselytise, to educate, to organise in networks of solidarity and action. It’s simple: let’s model ourselves on our enemy.”

Guillaume Faye was an important figure in the “New Right” in France in the late 1960s and 1970s. The New Right started with the founding of the Groupement de recherche et d’études pour la civilisation européenne (GRECE) under the leadership of the conservative thinker Alain de Benoist in 1968 in France. The New Right embraced the idea of metapolitics, discussed earlier, and presented themselves often as the Gramscians of the Right. Faye was one of the leading thinkers and theorizers of the French New Right. He had a PhD from Sciences Po and worked mostly as a journalist, for the leading conservative French daily Le Figaro. He published the book we are reading, Why We Fight, in French in 2001.

The greatest threats to European civilization, Faye writes, are “Narcissism, consumerism, devirilisation, homophilia, social egoism, xenophilia (improperly called ‘anti-racism’), demographic decline, cultural neo-primitivism, a rejection of aesthetics and the will to live, hatred of aristocratic and warrior values, the cult of the economy (secular monotheism), the disfiguration of classical humanism and true spirituality, [and] the triumph of a vulgar, hypocritical humanism” (39-40).

Struggle and the will to power are key to survival, for Faye: “A people or civilisation that abandons its will to power inevitably perishes, for what doesn’t advance, retreats—what doesn’t accept life as struggle hasn’t long to live.” (261) Like Friberg later, there is a strong theory of genetics: “A people’s long-term vigour lies in its germen, i.e., in the maintenance of its biological identity and its demographic renewal, as well as in the health of its mores and in its cultural creativity and personality. On these two foundations a civilization rests.” (37)

Faye is dedicated to the resistance, and somewhat single minded about that. He constantly warns against anything that might distract from the resistance, or pull his readers away from frontal resistance. “We need, in a word, to be alert to demobilising mysticisms, to a pretentious but hollow intellectualism, to easy refuge in a ‘spirituality’ or ‘philosophy’ whose attitudes, postures, and loopholes are ultimately tangential to the resistance.” (35; see also 264)

To the question, the explicit question, “What is to be done?”, Faye offers these:

There are, of course, some internal differences. By contrast to Faye, Friberg rejects revolution. He emphasized that “Revolutionary prattle can do nothing but agitate the mentally unstable into acts of violence which are both immoral and can have no practical value whatsoever” (Friberg, 35). But Faye embraces it. He identifies as part of “a revolutionary movement” (Faye, 269).

The American Alt-Right readings especially are almost more single-mindedly focused on race—specifically on the threat of the Left on whites. The editor of A Fair Hearing, George T. Shaw, emphasizes in the very first sentence of his Introduction, that “If alt-right ideology can be distilled to one statement, it is that white people, like all other distinct human populations, have legitimate group interests.” (Shaw, ix) Shaw’s opening statements are jaw-dropping:

Richard Spencer, in his chapter “Stop Watching Football,” shares these racial and ethnic priors. “With few exceptions,” Spencer writes, “all the truly great NFL quarterbacks have been white, and not just white, but Anglo and Germanic” (Shaw, 101). Those references to white and Germanic are clear references to Aryan supremacy, as is the discussion following that.

The goal of the American Alt-Right is, very simply, to “rout” the Left (xiv) and “wag[e] their own guerilla war,” in order, in their words, to “see sanity return to America and the larger West.” (xv)