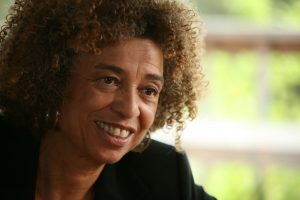 Angela Y. Davis is known internationally for her ongoing work to combat all forms of oppression in the U.S. and abroad. Over the years she has been active as a student, teacher, writer, scholar, and activist/organizer. She is a living witness to the historical struggles of the contemporary era.

Professor Davis’s political activism began when she was a youngster in Birmingham, Alabama, and continued through her high school years in New York. But it was not until 1969 that she came to national attention after being removed from her teaching position in the Philosophy Department at UCLA as a result of her social activism and her membership in the Communist Party, USA. In 1970 she was placed on the FBI’s Ten Most Wanted List on false charges, and was the subject of an intense police search that drove her underground and culminated in one of the most famous trials in recent U.S. history. During her sixteen-month incarceration, a massive international “Free Angela Davis” campaign was organized, leading to her acquittal in 1972.

Professor Davis’s long-standing commitment to prisoners’ rights dates back to her involvement in the campaign to free the Soledad Brothers, which led to her own arrest and imprisonment. Today she remains an advocate of prison abolition and has developed a powerful critique of racism in the criminal justice system. She is a founding member of Critical Resistance, a national organization dedicated to the dismantling of the prison industrial complex. Internationally, she is affiliated with Sisters Inside, an abolitionist organization based in Queensland, Australia that works in solidarity with women in prison.

Like many educators, Professor Davis is especially concerned with the general tendency to devote more resources and attention to the prison system than to educational institutions. Having helped to popularize the notion of a “prison industrial complex,” she now urges her audiences to think seriously about the future possibility of a world without prisons and to help forge a 21st century abolitionist movement.

During the last twenty-five years, Professor Davis has lectured in all of the fifty United States, as well as in Africa, Europe, the Caribbean, and the former Soviet Union. Her articles and essays have appeared in numerous journals and anthologies, and she is the author of nine books, including Angela Davis: An Autobiography; Women, Race, and Class; Blues Legacies and Black Feminism: Gertrude “Ma” Rainey, Bessie Smith, and Billie Holiday; The Angela Y. Davis Reader; Are Prisons Obsolete?; a new edition of Narrative of the Life of Frederick Douglass; and The Meaning of Freedom.