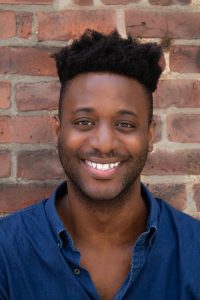 Ras Dia is an arts producer and curator who specializes in multi-disciplinary arts programming. He is the Assistant Producer of the Metropolitan Opera’s Peabody- and Emmy-award winning Live in HD series  seen in movie theaters in 70 countries worldwide, and recently helped produce the Jessye Norman Celebration for the Met and the Ford Foundation, with Alvin Ailey American Dance Theater, Renée Fleming, Anna Deveare Smith, and Gloria Steinem, and many others, gathering to pay tribute to the remarkable artist. Ras is the creative producer of Breathing Free.

Ras is also the Programming Director of Thresh, whose work has been presented by Guggenheim Works & Process, The Metropolitan Museum of Art, The Glimmerglass Festival, Jacob’s Pillow, and Silkroad, in addition to his work as Production and Finance Manager of Contemporaneous, which has been presented by such institutions as Lincoln Center, Park Avenue Armory, PROTOTYPE Festival, Merkin Concert Hall, MATA Festival, St. Ann’s Warehouse, and Bang on a Can. Ras was appointed Special Advisor on Arts and Advocacy for Humanitarian Causes to the United Nations Association of El Salvador, for his role as Executive Producer of Una Voz, Un Mundo: A Concert in Support of the People of Guatemala, presented in partnership with The New School, following the 2018 Fuego Volcano disaster.

He is the former Managing Director of the New York City Master Chorale, and has worked in marketing, development, production, and administrative roles with the National Children’s Chorus, Sadler’s Wells Theatre, Carnegie Hall, The New School’s MA TESOL Outreach Program, where he supported programs for immigrant, refugee, and survivor communities across New York City, and National Sawdust, the dynamic, artist-led, non-profit music venue in Williamsburg, Brooklyn, where he produced the Artists-in-Residence program, and co-created SAUCE, a series of artist sessions in partnership with Radeberger Pilsner and Sweet Reason CBD Water.