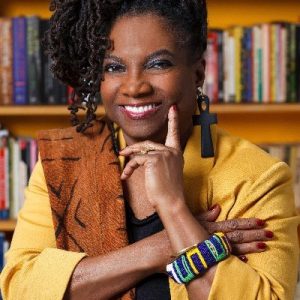 Nkechi Taifa is Founder, Principal and CEO of The Taifa Group LLC, a social enterprise firm whose mission is to advance justice. The Taifa Group’s portfolio of client services include coalition-building, convenings, government relations, meeting and retreat facilitation, strategic planning, and trainings. She also convenes the Justice Roundtable, a broad network of advocacy groups advancing progressive justice system reform, and serves as a Senior Fellow at the Center for Justice at Columbia University.  Nkechi was recently appointed to the governing board of the Corrections Information Council, an independent monitoring body that provides oversight over the conditions of District residents imprisoned throughout the Federal Bureau of Prisons and the D.C. Department of Corrections.

Nkechi served as the Advocacy Director for Criminal Justice for the Open Society Foundations and Open Society Policy Center from 2002-2018, focusing on issues of sentencing reform, law enforcement reform, reentry, prison reform, executive clemency, and racial justice. She also founded the Justice Roundtable coalition while at the Open Society. As the Roundtable convener, Taifa was in the leadership of the coalition responsible for passage of both the Second Chance Act reentry legislation (2008) and the Fair Sentencing Act crack disparity legislation (2010). She helped to fuel the mobilization of the Obama administration’s clemency initiative, which resulted in the early release from unjust imprisonment of over 1,700 prisoners.

Nkechi was founding director of the award-winning Equal Justice Program at Howard University School of Law from 1996-2002, where she also directed the Law School’s Externship Program and taught seminars on “Racial Disparity in the Criminal Justice System,” Public Interest Law,” and the “Law of Corrections and Prisoners’ Rights.”  She taught as an adjunct professor at American University Washington College of Law as well as Howard Law, and has taught high school students criminal law as part of the National Bar Association’s Crump Law Camp since 2001.

Taifa served as legislative counsel for the American Civil Liberties Union from 1991-1996 where she was the principal spokesperson on criminal justice and civil rights issues; policy counsel for the Women’s Legal Defense Fund from 1989-1991; staff attorney for the National Prison Project from 1984-1987; Office Manager and Network Organizer for the Washington Office on Africa from 1980-1983; elementary school teacher at NationHouse Watoto School from 1977-1980, and as founder and director of a Saturday School for youth during the 1970s. She also maintained a general criminal and civil law practice in the District of Columbia between 1987-1991, representing indigent adult and juvenile clients, and specializing in employment discrimination law.

Nkechi Taifa served as co-chair for the Leadership Conference on Civil Rights (LCCR) Steering Committee on D.C. Statehood (1993-95) which resulted in a historic first vote in Congress; and on the Leadership Conference’s Task Force on Voting Rights (1991- 93) which resulted in passage of the National Voter Registration Act (Motor Voter bill). She helped to mobilize the successful campaign against implementation of the death penalty in the District of Columbia in the early 90’s, and served as coordinator and trainer for the 1995 Million Man March Legal Observer Committee. Taifa served as a prosecutor delivering the Opening Statement for both the 2007 International Tribunal on Hurricanes Katrina and Rita, and the 1997 International Tribunal for Justice for Mumia Abu-Jamal.
Nkechi Taifa has testified before the U.S. Congress, the United States Sentencing Commission, the Council of the District of Columbia, and the American Bar Association Justice Kennedy Commission.  She served as an appointed Commissioner and Chair of the District of Columbia Commission on Human Rights from 2007-2014.

Nkechi Taifa has had five law review articles published, “Integrative Solutions to Interrelated Issues: A Multidisciplinary Look Behind the Cycle of Incarceration;” “Cracked Justice: A Critical Examination of Cocaine Sentencing;” “Three Strikes and You’re Out – Mandatory Life Imprisonment for Third Time Felons;” “Civil Forfeiture vs. Civil Liberties;” and “Codification or Castration – the Applicability of the International Race Convention to the U.S. Criminal Justice System.”

She was the Project Chair for the publication, Tulia: Tip of the Drug War Iceberg, and author of the chapter, “Social Policy Implications of Racial Disparities in the Criminal Justice System,” published in The Color of Social Policy. She is also the author of ground-breaking White Papers and Issue Briefs, such as “Clemency: An Inside Story from a Progressive Advocate” (Federal Sentencing Reporter June 2017); “Racism in the Criminal Justice System: Institutionalized Genocide?” (American Constitution Society 2016); “A Bittersweet Moment in History: Passage of the Fair Sentencing Act (NACDL Champion Magazine 2010); “Roadblocked Reentry: the Prison After Imprisonment” (National Bar Association Magazine 2006); and “Reflections from the Frontlines: An Insider’s Perspective on the Crack Cocaine Controversy” (Federal Sentencing Reporter 1998).

Nkechi Taifa served as the principal author of the Advancement Project’s report, “Re-Enfranchisement! A Guide for Individual Restoration of Voting Rights in States that Permanently Disenfranchise Former Felons” (2002). She was a contributing author to Black Reparations: American Slavery and its Vestiges; Reparations Yes: The Legal and Political Reasons Why Blacks Should be Paid for the Enslavement of Our Ancestors; and Decolonization U.S.A.

Nkechi currently serves on the Legal Advisory Team of the Legacy of the GU272 Alliance (descendants of the 1838 Jesuit sale of 272 enslaved persons which ensured the survival of Georgetown University); is a past president of the DC Chapter of the National Conference of Black Lawyers and founding member and former co-chair of the Legislative Commission of the National Coalition of Blacks for Reparations in America. She is a member of the National African American Reparations Commission, and an advisor to the Institute of the Black World 21st Century.

A multi-talented individual, Nkechi Taifa received an Individual Artist Fellowship Award for Excellence in Literature from the D.C. Commission on the Arts and Humanities, and is the published author of two books for children, Shining Legacy (1983) which highlights twelve Black heroes and heroines through moving stories accentuated with rhyme; and The Adventures of Kojo and Ama (1992) which contains seven wisdom-filled stories combining excitement, fun and suspense with lessons in pride and heritage. She performed spoken word with the group “BlackNotes” as part of its debut CD project, leading her original creation, “While Malcolm Preached, Trane Played.”