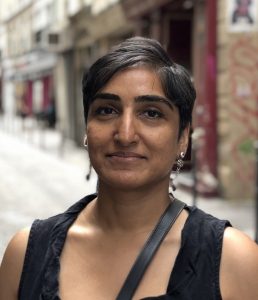 Karuna Mantena is Professor of Political Science at Columbia University. She specializes in political theory with research interests in the theory and history of empire, South Asian intellectual history, and postcolonial democracy.  Karuna holds a B.Sc.(Economics) in International Relations from the London School of Economics (1995), an M.A. in Ideology and Discourse Analysis from the University of Essex (1996), and a Ph.D. in Government from Harvard University (2004). Her first book, Alibis of Empire: Henry Maine and the Ends of Liberal Imperialism (2010), analyzed the transformation of nineteenth-century British imperial ideology. She is currently finishing on a book on M. K. Gandhi and the politics of nonviolence, tentatively titled Gandhi’s Realism: Means and Ends in Politics. She is also co-director of the International Conference for the Study of Political Thought.

Some of Mantena’s recent publications include: “Showdown for Nonviolence: The Theory and Practice of Nonviolence,” To Shape a New World: The Political Philosophy of Martin Luther King, Jr., edited by Brandon Terry and Tommie Shelby (2018); “The Power of Nonviolence,” AEON (2016); “Popular Sovereignty and Anticolonialism,” Popular Sovereignty in Historical Perspective, edited by Richard Bourke and Quentin Skinner (2016); “On Gandhi’s Critique of the State: Sources, Contexts, Conjunctures,” Modern Intellectual History 9: 3 (2012); “Another Realism: The Politics of Gandhian Nonviolence,” American Political Science Review 106: 2 (2012); “Social Theory in the Age of Empire,” Empire and Modern Political Thought, edited by Sankar Muthu (2012); “Genealogies of Catastrophe: Arendt on the Logic and Legacy of Imperialism,” Politics in Dark Times: Encounters with Hannah Arendt, edited by Seyla Benhabib, Roy T. Tsao, and Peter Verovsek (2010).