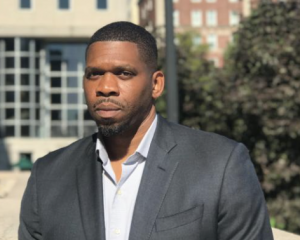 Christopher Wolfe SOA’18 is the inaugural Artist-in-Residence at the Eric H. Holder Jr. Initiative for Civil and Political Rights. Chris graduated from the United States Military Academy (West Point) in 2000 and served as a Field Artillery officer in the U.S. Army for six years. He is a veteran of Operation Iraqi Freedom and was awarded the Bronze Star Medal for meritorious service in a combat zone. After completing military service, Chris earned his MBA with a concentration in Investment Finance from Duke University’s Fuqua School of Business and worked on Wall Street as an investment banker during the height of the financial crisis. After five years on Wall Street, Chris earned his MFA from Columbia University in creative writing as a fiction concentrator. At Columbia, he was an instructor for The Columbia Veterans Creative Writing Workshop and was selected for the School of the Arts Teaching Fellowship. Chris currently teaches creative writing at Rikers Island to incarcerated students as a part of Columbia University’s Justice-In-Education Initiative. His writing has been featured in the BOMB Magazine, Guernica, The New York Times Magazine and two anthologies including The Road Ahead: Fiction from the Forever War and The Kiss: Intimacies from Writers.

In addition to serving as the Artist-in-Residence at the Holder Initiative, Chris has been appointed as an Adjunct Assistant Professor in Columbia University’s School of the Arts Writing Program.