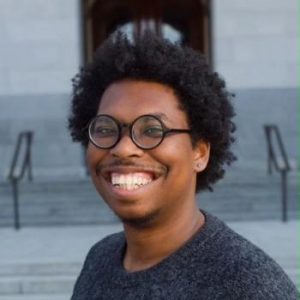 Woods Ervin is a Black nonbinary trans person from the South who has been deeply immersed in movements for racial and gender justice for over a decade. Woods began organizing in 2006 in Chicago with the Broadway Youth Center, both as a case manager and to develop transformative justice practices for street-based trans youth. Woods has been a member of Critical Resistance since 2010, and from 2014 to 2018 was part of rebuilding Transgender, Gender-variant, Intersex Justice Project (TGIJP). Through both organizations, Woods organized to stop construction of a jail in San Francisco, and developed policy recommendations for housing trans people in prisons, jails, and shelters, working with formerly incarcerated transgender people to develop a policy agenda based on their experiences.