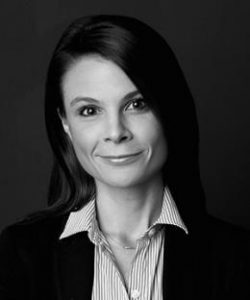 Maeve Glass is a legal historian of the United States who examines the development of constitutional law and its implications today. She teaches Property, as well as courses on the legal history of American slavery and constitutional history. After receiving her J.D. from Columbia, Glass earned a Ph.D. from Princeton University, and she is currently completing her first book, These United States: The Fracturing of America, which explores how the United States became a nation of co-equal states. Before her appointment to the Columbia Law School faculty in 2018, Glass was an academic fellow at the Law School. She has also held fellowships in legal history at Harvard Law School and New York University School of Law. Glass has received awards from the American Society for Legal History for her work on the history of state citizenship as well as from the National Institute of Military Justice for her work on the history of military commissions.