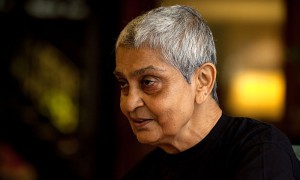 Gayatri Chakravorty Spivak is University Professor and a founding member of the Institute for Comparative Literature and Society.  Her fields of study span from the 19th- and 20th-century literature; politics of culture; feminism; Marx and Derrida; to globalization. Her most recent publications include the 2016 fortieth-anniversary edition of Jacques Derrida’s Of Grammatology, Readings (2014), and An Aesthetic Education in the Age of Globalization (2012).