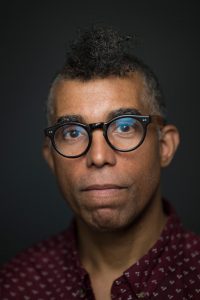 Dread Scott makes revolutionary art to propel history forward. His work is exhibited across the US and internationally. In 1989, his art became the center of national controversy over its transgressive use of the American flag, while he was a student at the School of the Art Institute of Chicago. Dread became part of a landmark Supreme Court case when he and others defied the new law by burning flags on the steps of the U.S. Capitol. He has presented at TED talk on this. Dread’s studio is now based in Brooklyn.

His work has been included in exhibitions at MoMA PS1, the Walker Art Center, Jack Shainman Gallery, and Gallery MOMO in Cape Town, South Africa, and is in the collection of the Whitney Museum and the Brooklyn Museum. His performances have been presented at BAM and on the streets of Harlem, NY. He is a 2019 Open Society Foundations Soros Equality Fellow and has received grants and fellowships from United States Artists and Creative Capital Foundation.

In 2019 he presented Slave Rebellion Reenactment, a community engaged project that reenacted the largest rebellion of enslaved people in US history. The project was featured in Vanity Fair, The New York Times, Christiane Amanpour on CNN and highlighted by artnet.com as one of the most important artworks of the decade.