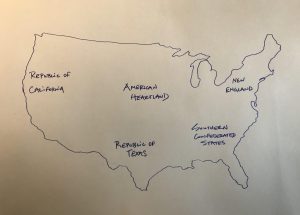 There comes a time when mature adults must decide to govern themselves and not others. When honest women and men must acknowledge their sincere differences in human values and political aspirations. When enlightened people must agree to disagree.

That time has come today, in the United States. After more than 200 years of productive experimentation, the country today is fundamentally divided over foundational human values and basic visions for society. Those divisions have become too profound to ignore or to reconcile.

Some Americans believe deeply and earnestly in private health care, gun ownership rights, pro-life values, the death penalty, or closed borders. Other Americans believe sincerely and profoundly in universal health care, public education, gun control, unions, refuge, or family choice. The cleavages between these different values and views of society have simply become too deep. There is no longer good reason for some to impose their set of values on others.

By agreement as well, the American people should discuss and reach agreement, or not, on the possibility of an “American Union” so that there would be no tariffs between the new sovereign states, or on the possibility of an organization, such as an “American Treaty Organization,” to assure the common defense. But separate sovereign governments would entail separate political and legal institutions, separate tax and revenue mechanisms, and separate military defense and policing bodies.

In the meantime, of course, everyone will continue to invest their times, their lives, and all their resources into trying to win executive and legislative majorities in the next sets of elections. Barring an agreement to disagree, we all would continue the struggle to impose our values on others.

But it is time to begin to imagine a peaceful resolution of what are, today, truly unbridgeable differences. As mature public citizens, we would all be better off governing simply ourselves.

— Kant, “An Answer to the Question: ‘What Is Enlightenment?'”