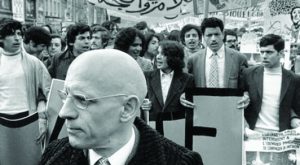 Foucault described the mass mobilization in Iran as an Islamic uprising. He did not minimize in any way its Islamic religious foundations or modes of expression. On the contrary, Foucault framed the uprising through the lens of Ernst Bloch’s thesis, in The Principle of Hope (3 vols., 1954-1959), on the rise, in Europe, from the twelve to the sixteenth century, of the religious idea that there could come about on this earth a form of religious revolution. Foucault related the events in Iran to this religious model, originally formulated by dissident religious groups in the West at the end of the Middle Ages—and which Foucault referred to as “the point of departure of the very idea of Revolution.”

Foucault explicitly characterized the will of those Iranians in revolt with whom he had contact as taking the form of a “religious eschatology”—not the form of a quest for another political regime, nor in his words for “a regime of clerics,” but instead for a new Islamic horizon. When those in revolt spoke of an Islamic government, Foucault maintained, what they had in mind were new social forms based on a religious spirituality, sharply different than Western models. Foucault pointed to Ali Shariati as the thinker who had most clearly posed the problematic and formulated this vision.

Foucault did not condemn this mode of political spirituality—to the contrary, he wrote about it with respect and admiration for those who rose up and risked their lives against their oppressors. Foucault did warn that “Islam—which is not simply a religion, but a mode of life, a belonging to a history and to a civilization—risks constituting a gigantic powder keg, at the scale of hundreds of millions of people. Since yesterday, any Muslim state can be revolutionized from within, from the basis of its secular traditions.” But he traveled to Iran without hostility, rather with sympathy for the uprising.

And it is here, in his writings on Iran, that Foucault most clearly articulated what he called his own “theoretical ethic”: “It is ‘antistrategic’: to be respectful when a singularity revolts, intransigent as soon as power violates the universal.” (Useless to Revolt?)