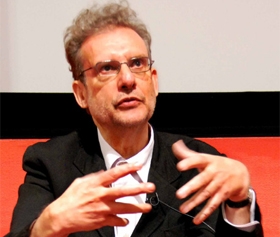 John Rajchman received his PhD from the Philosophy Department at Columbia, where he now teaches in the Art History department. He specializes in theory and criticism in art and philosophy in the 20th and 21st centuries. He has recently edited French Philosophy Since 1945: Problems, Concepts, Inventions (2011) with Etienne Balibar and Anne Boyman, and is the author of The Deleuze Connections (2005); Constructions (Writing Architecture) (1998);  Truth and Eros: Foucault, Lacan, and the Question of Ethics (1991);  Philosophical Events: Essays of the ‘80s (1991); and Michel Foucault: The Freedom of Philosophy (1985). John Rajchman has previously taught at Princeton University, Massachusetts Institute of Technology, Collège International de Philosophie in Paris, and The Cooper Union. He is a Contributing Editor forArtforum and a former editor of October.