Frantz Fanon’s (1925-1961) thought and writings are marked by an orientation toward a possible future both in time and space, captured so poignantly in the closing chapter of Black Skin, White Masks (1952)—his call to constantly introduce “invention into life,” to “endlessly create myself,” to “build the world of you”—and in the closing line of The Wretched of the Earth: “comrades, we must make a new start, develop a new way of thinking, and endeavor to create a new man.” Fanon’s call on the colonized to “start over a new history of man” is striking, and naturally brings to mind many of the themes we have been discussing in Nietzsche 13/13.

Fanon’s first book—Black Skin, White Masks, published by Le Seuil in 1952 when Fanon was only 27 years old—was book-ended by Nietzsche. A certain Freudo-marxian Nietzsche, a Nietzsche embedded in a psychoanalytic perspective—but a Nietzsche nonetheless. Nietzsche is both the first philosopher explicitly mentioned in text and the final philosopher who closes the last page of the conclusion. “Man’s misfortune, Nietzsche said, was that he was once a child,” Fanon writes in the opening pages of the introduction, before naming Freud or even mentioning disalienation. And Fanon closes his book, after returning to the theme of disalienation, again with the penultimate thought that “At the start of his life, a man is always congested, drowned in contingency. The misfortune of man is that he was once a child.”

Nietzsche, Freud, Marx—the great nineteenth century thinkers of suspicion—accompany Fanon. And as they did, Fanon too would unmask. Unmask those “white masks” brought on by European colonialisms and their attendant complexes of inferiority. Much like Nietzsche, Marx, Freud, and building on that even earlier critical tradition, Fanon would seek to lift the veil from our eyes, to emancipate us from our self-incurred immaturity—from our childhood.

For Fanon, the task would not be easy—in part because of the peculiar history of French slavery and colonialism. As Fanon would show in the penultimate section of Black Skin, White Masks, titled “The Black Man and Hegel,” the Hegelian dialectic of master and slave would not play itself out in the same way in the French context, because the French lord as well as the colonized (and here, Fanon drew a distinction with the American experience) is “basically different from the one described by Hegel.” The colonizer does not seek recognition, and the colonized is far more dependent on him. In the French context, Fanon, writes, “the black man does not know the price of freedom because he has never fought for it.” It has just been given to him—in diluted and make-believe ways.

The Hegelian dialectic cannot play itself out—but leads, in this case, only to a purely reactional phase full of ressentiment. And it is therefore to Nietzsche and his will to power that Fanon turns to articulate a positive, “actional” call to arms. “Nietzsche had already said it in The Will to Power,” Fanon writes at the end of the last chapter on “The Black Man and Recognition.” Fanon adds—once again, accompanied by Nietzsche:

“To induce man to be actional, by maintaining in his circularity the respect of the fundamental values that make the world human, that is the task of utmost urgency for he who, after careful reflection, prepares to act.”

It is this positive, willful call to action that Fanon leaves us with in 1952: a call to introduce “invention into life,” to “build the world of you, man,” to always question, to disalienate, to “touch the other, feel the other, discover each other.” To “take a stand against this living death.” To be “a revolutionary.”

Black Skin returns to the Dionysian poetics of Césaire. It harkens back to Césaire’s conception of “Négritude,” which we discussed at the last Nietzsche 13/13—in fact, the continuity from that last seminar is striking. It is in Césaire that Fanon finds the best expression of cultural imposition and of the task ahead: to go all the way down, to reach rock bottom, but to come back up and overcome—bringing “the black man” with him, “lift[ing] him up to the skies.” “Rise/ Rise/ Rise,” that is the sentiment, and one can almost hear Zarathustra as well in those passages.

Frantz Fanon’s Black Skin, White Masks (1952) reflects a deep engagement with the thought of Nietzsche, especially in relation to the themes of the active and reactive, spiritual metamorphoses, creativity, and willing a new vision of humanity. In this seminar, we will explore Fanon’s work and its influence on critical and postcolonial theory with our distinguished guests, Emily Apter, Homi Bhabha, and Brandon Terry. 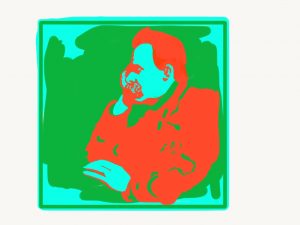