Although Hannah Arendt had, in The Human Condition and Between Past and Future, sustained important conversations with Nietzsche, it is really only in 1975 that Arendt would engage Nietzsche’s thought in the most direct and sustained manner—in her chapter titled “Nietzsche’s repudiation of the Will” in Volume 2 of The Life of the Mind, the volume on “Willing” or, as Arendt would say, on “the problem of Freedom.”[i] By that time though, in the mid-1970s, Nietzsche had already been recuperated from the ignominy of his fascist appropriations and made part of the philosophical tradition—paradoxically, in the case of Hannah Arendt, by Martin Heidegger primarily. Nietzsche would thus become, for Arendt, one philosopher among others in a lengthy philosophical history of the concept of “willing”—a philosophical conversation that spans the Apostle Paul, Epictetus, Saint Augustine, Thomas Aquinas, Duns Scotus, to or through Nietzsche ultimately to Heidegger, and then beyond him too to the concept of judgment itself. And it is in these pages that she would articulate her imposing diagnosis of Heidegger’s reading of Nietzsche: “to put it bluntly, the first volume explicates Nietzsche by going along with him, while the second is written in a subdued but unmistakable polemical tone.”[ii]

In this ongoing conversation, Nietzsche plays a pivotal role, but no more pivotal perhaps than Augustine, Aquinas, or those other philosophers of the will. In several passages, Arendt lauds Nietzsche: “No one knew this better than Nietzsche,” Arendt exclaims as she introduces, in her volume on “Thinking,” the dissolution of the suprasensory world.[iii] In the second volume, Arendt describes Nietzsche as “the greatest master” of the art of turning-the-tables, with “his mercilessly honest thought-experiments.”[iv] Elsewhere she refers to his “unsurpassed clarity.”[v] But despite these asides, the relation to Nietzsche remains ambivalent.

In many ways, one can hardly think of two more different sensibilities than Arendt and Nietzsche. The civic republican and participatory democratic dimensions of Arendt’s thought seem utterly at odds with the radical individualism of the over-man. Nietzsche was not a man of the polis, so much as someone who would try to find there converts to his vision of human overcoming. In other respects, though, the two seem to be kin, especially when it comes to the importance of “becoming” and the freedom that “becoming” injects into their world views. Also in their disenchantment with their respective modernities, with a certain tragic quality, and all the losses that have accompanied historical progress. One can draw a line from Nietzsche’s thoughts on becoming to Arendt’s writings on beginnings. And when she states, in On Revolution, that “revolutions are the only political events which confront us directly and inevitably with the problem of beginning,”[vi] the importance of new beginnings and of taking responsibility for one’s actions seem to have a resonance with Nietzschean notions of invention and becoming. As Arendt would write in her introduction to Willing, “No doubt every man, by virtue of his birth, is a new beginning, and his power of beginning may well correspond to this fact of the human condition.”[vii] That, of course, makes one immediately think of Nietzsche’s becoming—far more than Heidegger’s being.

Nietzsche then is an influential figure in Arendt’s thinking. As Bonnie Honig suggests, “From Nietzsche, Arendt borrows not only the stabilizing practice of promising, theorized by Nietzsche in the second essay of Genealogy, but also that of forgiveness, a process of ‘constant mutual release’ theorized by Nietzsche as a practice of dismissing in the first essay of Genealogy.”[viii] But Nietzsche is never the formative interlocutor to Arendt. And he does not escape her critique. His writings on the will to power, Arendt would characterize in her postscriptum on thinking, ultimately, as “self-defeating.”[ix] In the end, Arendt leaves Nietzsche’s “repudiation” of the will behind in order to turn to the more important matter, on her view, of judging. That volume was cut short, though, by her untimely death.

In this sense, the relationship between Nietzsche and Arendt differs from those that we explored previously with Bataille, Blanchot, Deleuze—and even Heidegger. If Heidegger’s turn to Nietzsche shortly before and during World War II fundamentally transformed Heidegger’s thought, the same cannot be said for Arendt.

What then is the proper way to read Arendt’s Nietzsche? How would it affect our reading of Arendt? How might it impact our interpretations of Nietzsche? And what does it tell us for the pressing and critical issues of politics today, in these dark times? To help us work through these issues, we are privileged to have with us four of the world’s leading experts on Arendt: Seyla Benhabib, Simona Forti, Linda Zerilli, and Ayten Gundogdu. 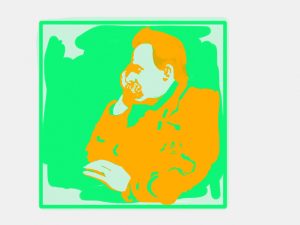 At the end of her life, Hannah Arendt was writing a series of volumes on The Life of the Mind, the second of which is called “Willing.” In that work, Arendt most directly engaged the thought of Nietzsche in relation to Heidegger and others. This session will explore Arendt’s Nietzsche.