Césaire, Nietzsche, and the Struggle Against Colonialism

Aimé Césaire’s encounter with Nietzsche—in his own words, one of his essential reference points—nourished a vitality, an indignation, a passion for tragedy, for art, for knowledge and politics, in sum, a will to power that would enrich his poems and plays, but also propel his anti-colonialism and political struggles.

“The revenge of Dionysus on Apollo”: this theme from The Birth of Tragedy refracted throughout Césaire’s poetics and plays, and shot through his 1944 manifesto, Poésie et connaissance —a text that would confirm and fuel Césaire’s revolt against French colonialism and racism that would take the name of “Négritude.” Nietzsche’s privilege of the Dionysian element in early Greek tragedy, of Aristotelian poetics over scientific fact, of myths and becoming over doers and being—these were inspirational to Césaire, weapons and intellectual ammunition that he would deploy to resist the oppressive, dominant discourse of scientific progress associated with white domination in the Antilles, and the forms of conventional rationality that dominated philosophical discourse in the West.

Scientific progress, Césaire would call “impoverished knowledge” that can only give us an “impoverished man.” As for Kantian philosophy, Césaire would write, “the asylum keepers are all there. And singularly limiting.” But Césaire would go further. By contrast to scientific knowledge or Western conventional rationality, Césaire wrote, it is only the revolutionary image that allows man to break through the limits:

Césaire gives voice to the radical potential in Nietzsche’s writings on tragedy and poetics, a radical potential that would ultimately nourish an entire artistic and political movement, Négritude, and motivate decolonization. With Césaire and Léopold Sédar Senghor (1906–2001), it would produce a unique combination of self-determination without nationalism or state sovereignty—a distinctive view of decolonization and democratic federation that Gary Wilder analyzes brilliantly under the rubric “Freedom Time.”

It is in the poetic arts, in the Dionysian, that Césaire would draw much of the vitality and poetic knowledge necessary to resist colonial and Western domination. In this sense, Césaire’s writings demonstrate not only the influence of his early Nietzschean encounters, but rather how much more can be done—in a revolutionary way—with those early fragments and aphorisms. And so, it is to Césaire’s art form and creativity, his poetic knowledge and political practice, that we can turn to for our own inspiration and resistance in these dark times. 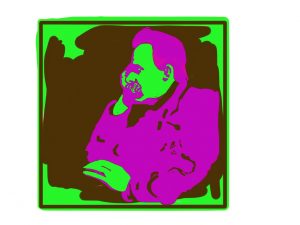 The Negritude critique of colonial modernity in the interwar and postbellum period drew importantly on the vitalist philosophies of Nietzsche, Bergson, and Heidegger. Many of the central figures, including Aimé Césaire, Léopold Sédar Senghor, and Édouard Glissant found inspiration in these countercurrents of Western thought. Césaire and Senghor, especially, adopted the notions of the Dionysian and the Apollinean from Nietzsche’s Birth of Tragedy in their aesthetic philosophy. In this session we will explore this conversation with Nietzsche’s thoughts on tragedy.