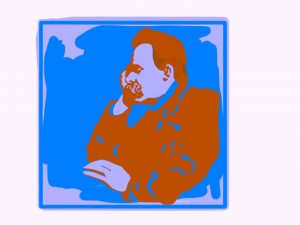 We turn first, in Nietzsche 1/13, to the influential lecture series and written manuscripts on Nietzsche that Martin Heidegger delivered and wrote beginning in 1936 at the University of Freiberg and extending throughout the Second World War and into the early 1960s, when Heidegger published his two large volumes titled Nietzsche, Volumes I and II.

The texts that we will focus on today consist, then, of:

all of which were reworked by Heidegger during the 1950s and 1960 and prepared for publication in 1961. 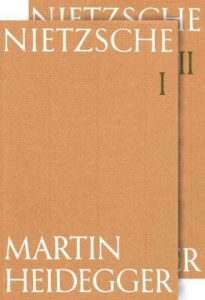 To contend that these lectures and writings on Nietzsche represent a confrontation with National Socialism is a claim often heard, but that I personally find intellectually obscene.

What can be discerned in these writings, instead, is a productive confrontation with Heidegger’s earlier phenomenological insight into the condition of our being, as well as a shifting relationship to Nietzsche’s work over time.

Heidegger published Being and Time in 1927, and it was there, I would argue, that the seeds were planted for his confrontation with Nietzsche. In particular, it is in those passages in Being and Time where Heidegger dismisses “will” as a primary concept to help us understand being.

In discussing the primordial totality of being, of Da-sein, as care in Part I, subpart VI of Being and Time, Heidegger writes that “care” must be differentiated “from phenomena which at first might seem to be identified with care.” And of those phenomena that need to be distinguished, Heidegger lists as the first, “will” – followed by “wish, predilection, and urge.” (I.vi.182; SUNY edition at p. 171). “Care cannot be derived from them [i.e. will] because they are themselves founded upon it.” Ibid. A few pages later, Heidegger writes:

The phenomenon of care in its totality is essentially something that cannot be split up; thus any attempts to derive it from special acts or drives such as willing and wishing or urge and predilection, or of constructing it out of them, will be unsuccessful.” (I.vi.193-194; SUNY edition at p. 180-181, emphasis added).

Heidegger concludes this discussion in the following terms: “Willing and wishing are necessarily rooted ontologically in Da-sein as care, and are not simply ontologically undifferentiated experiences which occur in a ‘stream’ that is completely indeterminate as to the meaning of its being.” (I.vi.194; SUNY edition at p. 181, emphasis added).

These words in Being and Time, I believe, form the genesis of Heidegger’s urge or need to study Nietzsche a few years later—especially a Nietzsche that Heidegger himself would identify centrally (at least in the first years of lectures) with the concept of the will to power and the eternal return of the same. That, of course, and the fact that Nietzsche, by sharp contrast to Heidegger, had so fundamentally privileged becoming over being. In remarkable passages that Heidegger would return to, over and over, Nietzsche had famously placed doing and becoming over being and essence. “To stamp Becoming with the character of Being—that is the supreme will to power,” Nietzsche had exclaimed, as Heidegger noted repeatedly (see, e.g., Vol. I, p. 19; Vol. III, p. 213).

For someone like Heidegger who, first, focused on being as the central primordial question to ask and address, and who, second, had subsumed will, privileging instead notions of care, a confrontation with Nietzsche was inevitable. And, I would add, extremely productive.

That is our task today in Nietzsche 1/13: to reread Heidegger’s confrontation with Nietzsche in order to highlight those productive elements, productive to our own critical projects.

And to help us with this task, Jesús Velasco and I are delighted to welcome to the seminar today Professors Babette Babich and Taylor Carman. They will present first, after which Jesús Velasco will intervene, propose questions, and moderate the discussion.