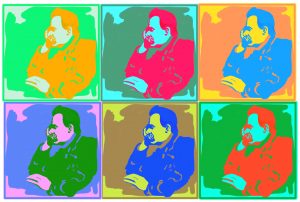 Last year, we set out to examine the different critical interventions that Foucault made over the arc of his research at the Collège, and the many pistes de recherches that he left us. Our goal was constructive: to extract, to mine, to unearth critical moves that might inform our own critical thought. Our project was also to create an archive to accompany the next reader of Foucault’s Collège de France lectures—and we believe that the articles and video recordings from those seminars (which are available on line) indeed constitute a “Reader’s Companion” for anyone interested in delving into the series of lectures, from Foucault’s very first Lectures on the Will to Know in 1971 and Penal Theories and Institutions in 1972 to the very last on The Courage of Truth in 1984.

In the course of those seminars, we came across on a number of occasions different ways in which Foucault drew on Nietzsche’s thought to enrich his own critical enterprise. Foucault rarely engaged Nietzsche’s biography or the controversies surrounding Nietzsche’s appropriations, but he drew critically on particular insights from Nietzsche’s writings.

Of particular importance to Foucault was Nietzsche’s idea of the “invention” of knowledge—an idea that was formative to Foucault especially in 1973 when he was delivering the lectures on The Punitive Society and, a few months later, in Rio, on Truth and Juridical Form (also earlier, in his lectures on Nietzsche in 1969 at the Centre Universitaire Expérimental de Vincennes and in his first lecture series at the Collège de France on the will to know in 1971).

In those lectures, it is Nietzsche’s epistemological intervention that would serve as Foucault’s guiding methodological compass. The passages from Nietzsche’s writings that Foucault would draw were primarily fragments from 1873 and aphorisms from The Gay Science (about 1882) where Nietzsche marks epistemic rupture—breaks in knowledge. These are moments in Nietzsche’s work, not of genealogy, but of “invention”: the model for knowledge, Foucault reads Nietzsche to say, is not origin, but creation, invention.

Now, to be invented is not to be born. It is not to derive the birth of the clinic or the birth of the prison, say, from its roots, but rather to find, in Foucault’s words, “a small beginning, one that is low, mean, unavowable.” To discover the “obscure power relations” and “small beginnings” that are “mesquin” and “vilenies”—petty, base, vile… “Good historical method,” Foucault would tell us, “requires us to counterpose the meticulous and unavowable pettiness of these fabrications and inventions, to the solemnity of origins.” Or, more brutally: “To say that [knowledge] was invented is to say that it has no origin.”

On this reading of Nietzsche, knowledge erupts without any prior being or history. It does not evolve from a seed, it does not have parents or ancestors, it has no genealogy, it simply appears at a moment in time, at a particular location, made-up, to be deployed in a struggle or battle:

Knowledge is simply the outcome of the interplay, the encounter, the junction, the struggle, and the compromise between the instincts. Something is produced because the instincts meet, fight one another, and at the end of their battles finally reach a compromise. That something is knowledge. (1973)

And this would imply that, at the core of knowledge there is a “state of war”: knowledge is made up within a social context of “hatred, struggle, power relations.” Foucault would develop these themes further in his lectures a few years later titled “Society Must Be Defended.” But as early as 1973, he would articulate his core methodological task in the following terms: “the problem of the formation of a certain number of domains of knowledge on the basis of the relations of force and the political relations in society.”

It was during those discussions that Jesús Velasco and I began to imagine exploring more deeply the ways in which critical theorists have drawn on Nietzsche—not just Foucault, but Deleuze as well, and Arendt, and Derrida.

And so, hesitantly, at the end of the Foucault 13/13 series, we announced that next year we would read critical theorists in the wake of Nietzsche. “What we will try to explore a little next year—although again, you all know how fraught it is to announce this so early, but anyway… —where we are headed next year is to explore, in 13 seminars, 13 critical takes on Nietzsche. The project will be to explore the rich tradition of contemporary critical thought that has emerged in the wake of Nietzsche. In other words, to explore Nietzschean contemporary critical thought in contrast, say, to the Marxian or Freudian traditions,” we announced. And we added:

there are, of course, many other Nietzsches that have fed and nourished contemporary critical thought. There is Deleuze’s Nietzsche, and Arendt’s Nietzsche at the end of her life, in the Life of the Mind: Volume 2, Willing. And there is, of course, Bataille’s Nietzsche, Heidegger’s Nietzsche, Sarah Kofman’s Nietzsche and Luce Irigaray’s, and Aimé Césaire’s, and Pierre Klossowski’s, and Maurice Blanchot’s. Yes, there are at least 13 Nietzsche’s, and so, next year, we will return, Jesús Velasco and I, perhaps to the Casa Hispanica, or to the Maison Française, or the Heyman Center, or perhaps the Institute for Advanced Study at Princeton, or the Columbia Global Center in Paris to explore Critique After Nietzsche 13/13.

Well, miraculously, we have stuck to our plans and have put together a remarkable series for you this year called Nietzsche 13/13:

Friedrich Nietzsche is a particularly interesting thinker for critical theorists. One of the great masters-of-suspicion of the nineteenth century, alongside Freud and Marx, he shared with them an epistemological and ethical instinct: the world that we know so well and experience second-hand, it turns our, is terribly deceiving. Like Freud and Marx, Nietzsche took it upon himself to lift the veil that covered our eyes and to try to show us, to shake us into seeing what is going on before us. Freud, as you know, would unveil the unconscious. Marx, the political economy as motor of history. And Nietzsche turned to a genealogy of our moral conceptions—of everything normative that we own—to challenge the value of our common morality itself.

Now, Marx and Freud were remarkable builders, and they, along with others in their wake would build empires. Empires that, remarkably, would be actualized in our times. Revolutions and governments, in the case of Marx. Entire schools, disciplines, and psychiatric apparatuses in the case of Freud. And, of course, schools of thought in both cases. The Frankfurt School. The Lacanian schools of all different stripes. Followers, practitioners, theoreticiens who would call themselves “marxist” or “freudien” or “post-marxist,” etc.

Not so, or less so, for Nietzsche. He was, to be sure, appropriated at different moments in history. Thus Spoke Zarathustra was distributed to German soldiers during World War I. And, as you know, the Nazis notoriously would appropriate his thought, with the help of his sister, Elisabeth Förster-Nietzsche. But there was no empire. There were no real followers. No school, certainly. Nietzsche attracted, it seems, a different kind of critical reader. More solitary. More outcast. A non-member.

Despite that, or perhaps because of it, Nietzsche’s writings and thought had tremendous influence across the disciplines, upending many—especially philosophy, political thought, philology, and critical theory—and significantly marking others, such as law, anthropology, and the humanities. A number of contemporary critical thinkers in the 20th century—Georges Bataille, Martin Heidegger, Hannah Arendt, Frantz Fanon, Gilles Deleuze, Michel Foucault, Luce Irigaray, Ali Shariati, and others—would draw inspiration from Nietzsche’s writings and develop strands of critical theory that have had great influence in disciplines as varied as history, law, philology, and the theory of science. These twentieth century thinkers helped forge unique Nietzschean strands of contemporary critical thought that radically challenges the way we think and engage the world today.

You may ask how we chose these 13 critical thinkers, how we include these and not others—others who could equally have been in this lineage. Georg Lukács, for instance, wrote a famous chapter on “Nietzsche as Founder of Irrationalism in the Imperialist Period” in 1952 as part of his book The Destruction of Reason. The philosopher and sociologist Georg Simmel before him wrote a book on Schopenhauer and Nietzsche, in 1907, and a separate text on Nietzsche’s moral thought in 1911. Karl Jaspers published an influential book on Neitzsche in 1936, which Heidegger discusses in his Nietzsche lectures, titled Nietzsche: Introduction to an Understanding of His Philosophizing. And Friedrich Kittler, and other German media theorists, as Reinhold Martin reminds me, wrote influentially on Nietzsche (especially on his relation to typewriters among other things).

The answer is at least two-fold. First, in drawing our list of 13 critical thinkers, we have sought to find theorists who drew constructively from Nietzsche—constructively, in the sense of helping us in our own critical projects. Not in the vein of a hagiography. On the contrary, we hope, as much as possible in these seminars, to avoid discussions of biographies and other trivia, and to stick closely to the ideas—constructively seeking ideas that have influenced and that can influence the course of thought. Second, we have sought to create interlinked conversations that, in particular, traverse certain thinkers of interest, such as Foucault, Deleuze, and Arendt.

For us, then, this is an opportunity to tease out what is critically useful in these 13 readings of Nietzsche. And in each case, our objective is not to crush the interpretation or engagement, but to examine it with care, to see if there is something important, if so, to find that and put it on our shelf, and if not, to move on quickly and go on to the next.

I’m not sure what the right metaphore is here: an critical object on a shelf; a weapon in our critical arsenal… Last Tuesday with our graduate students, I suggested “sampling.” My hypothesis there was that Nietzsche has been used for critical projects the way that contemporary musicians sample other people’s work. To sample is to appropriate a piece, often a small piece, a lyric or rhythm – and to use it for your own purposes. That’s quite different from scholars work with other thinkers. The point is not, by contrast, say, to working with Kant or Hegel or Platonic thought, to find the weaknesses in a system and rebuild its parts. One appropriates Nietzsche’s insights. Sampling Nietzsche, for purposes of our critical projects… can that be right, or possible? Of course, it may well depend on one’s reading of Nietzsche. And here, what immediately comes to mind is Heidegger’s lecture from the summer of 1939 (Vol. III, p. 4):

“Nietzsche belongs among the essential thinkers. With the term thinker we name those exceptional human beings who are destined to think one single thought, a thought that is always ‘about’ beings as a whole. Each thinker only thinks only one single thought.”

Our engagement with Nietzsche’s thought will depend on our interpretation of it. But our goal here is to create a repertoire of critical moves in conversation with Nietzsche’s writings and in relation to the different ways of approaching his writings. Selfishly, our personal goal, with Nietzsche 13/13, is to enrich our own critical projects—and we hope that you will join us in that attitude.

It does have important implications for how we hope the conversation will evolve. We are not interested so much in the man, Friedrich Nietzsche. We are not interested in the errors of his ways, nor the nefarious ways in which his work has been deployed – except insofar as they might relate to a potential critical use we would like to make of his work. As with Foucault 13/13, we are not interested in decimating the ideas, but rather in finding ideas to play with, without holding any punches. We would like to draw from, to mine, to exploit the critical thought in the wake of Nietzsche’s.

We invite you to join us in that constructive critical enterprise. Welcome to Nietzsche 13/13!