Due to the COVID-19 pandemic, this and the following sessions of Critique 13/13 were suspended. Please read the introduction to Critique 11/13 here.

Orientalism and After the Last Sky by Edward Said

In many ways, Edward Said’s book Orientalism remains today as vital and vibrant as it was when published in 1978. Orientalism offers a timeless historical analysis of the way in which the scholars, writers, and specialists of the Orient created an imaginary of the Oriental, and later the Arab, which served to help shape their own identity as Europeans, to justify their imperial conquests, and to help them control and dominate the colonies. Said’s writings analyze the way that knowledge operates as a cultural tool and a political weapon. Knowledge, Said argued, has material effects of reality: It shapes the conception of self and of the other—and it does so through a back-and-forth, a mutually constitutive act, that constructs an idea of the other as it shapes a conception of the self.

European culture thrived on the epistemological construction of the Orient. In Said’s words, “European culture gained in strength and identity by setting itself off against the Orient as a sort of surrogate and even underground self.” Building on but simultaneously against Nietzsche’s view of truth as illusions and Foucault’s theory of knowledge-power, Said crafted a sharp critique of the West as dependent on this recurring othering of Orientals and Arabs. “Truths are illusions that we have forgotten are illusions”: these famous words may sound too nihilistic to some, Said emphasized, but those words of Nietzsche “draw attention to the fact that so far as it existed in the West’s awareness, the Orient was a word which later accrued to it a wide field of meanings, associations, and connotations, and that these did not necessarily refer to the real Orient but to the field surrounding the word.”

Yes, indeed, that was true of the Orient for Europeans especially. And tragically, it is equally true today for the construction of the category of Muslims for many Americans. One can hardly imagine, in our current political climate in the United States, a timelier critical intervention than Said’s writings on orientalism as a way to capture the demonization of Muslims today—as well as Latinos and immigrants—as a vehicle to produce an imaginary American identity. When a Republican presidential candidate, later president of the United States, declares that “Islam hates us” and that “we have a problem in this country; it’s called Muslims,” we are right back, smack in the middle of Said’s writings on orientalism.

So much so, in fact, that in this seminar series dedicated to actualizing and deploying critical texts, it is almost as if Said’s writings on orientalism are too fresh to need rejuvenation.

Said presciently foresaw how the “Arab Muslim” would become a key trope in American culture, government, and public policy. Muslims, Said predicted, would be viewed more and more as increasingly menacing, bloodthirsty, and dishonest in our new geopolitical configuration. It is almost as if Said foresaw, writing in 1978, the tragic aftermath of 9/11. It is almost as if he prophesied our new counterinsurgency warfare paradigm of governing built on the fabrication, from whole cloth, of internal enemies—what I call The Counterrevolution.

Our ambition in this seminar is to return to critical texts in order to rethink our present political struggles. And so, since Said’s epistemological project remains as vital and vibrant as when it was written,  then how shall we deploy this remarkable work and where shall we direct our conversation?

Let me propose that we reflect on praxis.

Orientalism itself ended not so much on praxis, as with epistemology. “If this book has any future use,” Said concluded in 1978, “it will be as a modest contribution to th[e] challenge [to the worldwide hegemony of Orientalism], and as a warning: that systems of thought like Orientalism, discourses of power, ideological fictions—mind-forg’d manacles—are all too easily made, applied, and guarded…. If the knowledge of Orientalism has any meaning, it is in being a reminder of the seductive degradation of knowledge, of any knowledge, anywhere, at any time. Now perhaps more than before.” Now perhaps more than ever, one might add.

But what does one do, exactly, with that knowledge? To be sure, the critical unveiling is itself a form of praxis, but it must also serve as a prolegomenon to praxis. How can we deploy or rethink today, for our contemporary political struggles, the many insights that we discover in Said’s writings?

To engage this conversation, I am delighted to welcome Homi K. Bhabha, a dear friend and a colleague to the 13/13 series and one of the world’s leading critical thinkers. The Anne F. Rothenberg Professor of English and American Literature and Language at Harvard University, Homi Bhabha is the author of numerous works exploring colonial and postcolonial theory, cultural change and power, and cosmopolitanism, including Nation and Narration and The Location of Culture, which was reprinted as a Routledge Classic in 2004.

We are delighted to be joined at Critique 11/13 by Homi Bhabha. 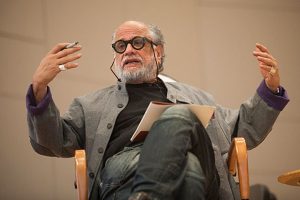