at the Institute for Social Research (Institut für Sozialforschung, IfS)

In Critique 7/13, we return to Adorno, but this time to the late Adorno of the Negative Dialectics (1966), in conversation with Martin Saar, Professor of Social Philosophy at the Goethe Universität Frankfurt am Main.

You will recall that we began Critique 13/13 with the early Adorno of “The Actuality of Philosophy” from 1931. In that essay, Adorno took as his point of departure a radical break in philosophy: contemporary philosophy, Adorno argued, could no longer aspire to understand the world in its totality. The actual could not be rendered fully rational. The systematic and total theories of earlier German Idealism were things of the past. “Philosophy,” Adorno suggested, “must learn to renounce the question of totality.”

You will also recall that, although Adorno urged philosophers to eschew totalities and focus on middle-level concepts (such as the commodity form or class), Adorno nevertheless retained confidence in dialectical reason. “Only dialectically, it seems to me, is philosophic interpretation possible,” Adorno wrote in 1931. The dialectical method, Adorno maintained, remained the only possible way forward for a philosophy of interpretation.

The question this raised, naturally, was what Adorno meant by dialectic, especially in a context where he had embraced philosophy as a form of interpretation as opposed to science (Wissenschaft) which he viewed as a type of research. What was the concept of dialectic that Adorno embraced given his more humble vision for philosophy?

It is fair to say that Adorno dedicated himself to this precise question over the course of the next decades and until the end of his life. Through years of exchange with Max Horkheimer and his life-long engagement with Hegel’s writings—from the drafting of the Dialectic of Enlightenment (early 1940s) to his Three Studies on Hegel (1963) and further on—this question was always present and at the forefront.

Adorno’s work Negative Dialectics, published in 1966, and his two essays “Critique” and “Resignation” from his final published work, Critical Models: Interventions and Catchwords, in 1969, offer perhaps the final and most complete answer. In Critique 7/13, we return to Adorno’s final major writings on the dialectic—published just a few years before his Marginalia to Theory and Praxis that we read and discussed a year ago with Martin Saar at Praxis 7/13—in order to explore his answer and what we might call “the productivity of negativity.” 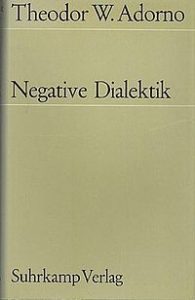