The Human Condition by Hannah Arendt

To think in crisis times: that is the heart of Arendt’s work and life, and of her magnum opus, The Human Condition, published in 1958. Those times in particular, the mid- to late-1950s, represented a unique historical conjuncture. They were of course, first, in the immediate aftermath of the Third Reich and of the Holocaust, and of the publication in 1951 of her book The Origins of Totalitarianism. Second, they followed also the human invention and use of the atomic bomb—a historical marker that Arendt referenced on several occasions in her work. As she emphasized, “politically, the modern world, in which we live today, was born with the first atomic explosions.” Third, they came on the heels as well of the first launch of an outer-space satellite that orbited around Earth—the first man-made object to be propelled into space to explore beyond our Earth, a technological development and instrument as unique and historically important as the invention of the telescope. Each of those historical dimensions shaped the writing of The Human Condition.

We live today in both similar and in different times. Similar, because the threat of authoritarianism and new forms of totalitarianism in this country and in Arendt’s country of origin, Germany, have never been of greater salience than when she was writing her book—not only the immediate aftermath of Fascism and Stalinism, but also, in the United States, at the tail end of McCarthyism (which was in decline by the mid- to late-1950s). Different, because the threat of nuclear annihilation, which was so present during the Cold War and so fundamentally shaped our consciousness then, has been replaced today by the looming catastrophe of global climate change. But for all the similarities and differences, the overarching crises we face today are not so unlike the ones Arendt faced in 1958: “Foremost in our minds at this moment,” she wrote, “is of course the enormously increased human power of destruction, that we are able to destroy all organic life on earth and shall probably be able one day to destroy even the earth itself.” (268-269) The dual admixture of rising political chaos and authoritarianism on the one hand, and of the threat of global climate change on the other hand, strike me as present instantiations of Arendt’s dilemma from 1958.

These present circumstances make The Human Condition a formative text for this seminar Critique 13/13 and its relation to praxis, or for that matter its relation to last year’s seminar, Praxis 13/13. In this work, Arendt recounts precisely the historical movements of theoria and praxis, and how praxis itself was transformed in the modern world in the process: how the disdain for labor in antiquity (associated with the work of slaves and women) gave place to a new privileging of life-reproducing labor, or what she refers to as “animal laborans,” the laboring animal.

From the outset, Arendt puts aside thinking or thought in her analysis of the active life (5), and only returns to it at the end of The Human Condition. (324) Yet it is that form of activity, it seems, that ultimately remains the most important for Arendt. In her own words, in fact in her own last words of the book, it is only thinking that can or should or would “surpass” all the other forms of active life. Thinking through, for instance—as she did in her earlier text, The Origins of Totalitarianism—the different elements and political circumstances that produce political oppression. Thinking through, as Seyla Benhabib emphasizes, “those currents of thought, political events, and outlook, which form a particular configuration and crystallization of elements” and that can help us understand and write a history of the present.[1] Thinking through, as Arendt would do there, the different paths forward, including, famously, the notion of “a right to have rights,” which would play such an important role in the decades to follow. (OT, 376)

How then can we actualize Arendt’s thought, today, to help understand and address the political crises that we face?

To help us explore this question and to reread The Human Condition in light of our present political circumstances, we are delighted to welcome the foremost authority on Hannah Arendt, Professor Seyla Benhabib, the Eugene Meyer Professor of Political Science and Philosophy at Yale University and a dear friend and senior scholar at the Columbia Center for Contemporary Critical Thought. The recipient of the Ernst Bloch prize for 2009, the Leopold Lucas Prize from the University of Tubingen (2012), the Meister Eckhart Prize (2014), and a Guggenheim Fellowship (2011-12), Professor Benhabib is a leading critical theorist and philosopher and scholar of international human rights law and politics. She is the author, among other works, of The Reluctant Modernism of Hannah Arendt (1996; reissued in 2002) and Exile, Statelessness, and Migration: Playing Chess with History from Hannah Arendt to Isaiah Berlin (Princeton University Press, 2018). 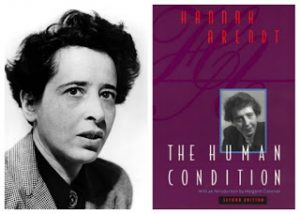