Critique of Dialectical Reason (Volume I) by Jean-Paul Sartre

The central problematic of Sartre’s Critique of Dialectical Reason and, more broadly, of his entire critical project after 1960 is how to reconcile existentialism with Marxism: How can we resolve the contradiction between, on the one hand, a Marxist philosophy that identifies in the contradictions between modes of production and social relations the motor of human action and revolution, and, on the other hand, an existentialist philosophy that was grounded on a radical freedom to act?

The answer, I suggest, is that in his Critique Sartre does away with the teleology that characterizes Marxist history, rejects the positivism that infuses scientific Marxism, and opposes all forms of mechanical dialectical thought. To be sure, Sartre retains significant elements of Marxism: he maintains that human beings are shaped by their historical situation, and that the tension between economic modes of production and social relations is central to that historical situation. He retains a strong commitment to contradiction and conflict as what motivates human action. And he preserves in his historical analysis the fundamental Marxist categories of the bourgeoisie, working class, and proletariat. However, he infuses his analysis with a phenomenology and psychology of individual action that takes into account human needs, frustrations, and ambitions.

Needs. Motives. Events. Situation. Scarcity. Projects. These are the words that permeate Sartre’s style of existential Marxism. “Man defines himself by his project,” he declares deep into the Search for a Method—echoing his writings on existentialism. The concept of “the project” is at the heart of Sartre’s philosophy: human beings form projects in response to their felt needs in a world marked by scarcity. And their projects—although they may well be situated and even shaped by historical conditions—remain individual projects of resistance to oppression, of satisfying needs, of achieving forms of liberation. Sartre infuses his analyses of individual human action with psychoanalysis, demonstrating through the example of the young Gustave Flaubert the importance of focusing on childhood, parents, siblings—all of the Freudian elements. Sartre also infuses his approach with cultural analysis, with symbolic analysis, and with a large dose of ambiguity.

The result is that Sartre constantly tries to complexify dialectical reason, to enrich it with psychoanalysis and cultural analysis, and to introduce the human being (and not just groups, such as the working class or the proletariat) back into the analysis. This is captured well in certain passages where Sartre spells out his own vision of history:

Men make their history on the basis of real, prior conditions (among which we would include acquired characteristics, distortions imposed by the mode of work and of life, alienation, etc.), but it is the men who make it and not the prior conditions…. To be sure, these conditions exist, and it is they, they alone, which can furnish a direction and a material reality to the changes which are in preparation; but the movement of human praxis goes beyond them while conserving them.

Sartre’s Critique of Dialectical Reason represents one of the most sustained efforts to integrate, on the one hand, a materialist critical theory attuned to the historical condition of late capitalism with, on the other hand, a praxis theory of human action. This remains a commanding task today. Join us at Critique 10/13 to think critically about Sartre’s project. 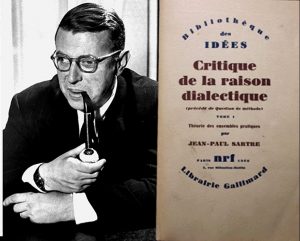