To reread key texts in critical theory in order for us to make them do new work to push forward our critical praxis: That is the ambition of this year’s new 13/13 seminar, Critique 13/13.

The upcoming seminar for 2019-2020 will return to 13 brilliant texts in critical theory: to reread Adorno, Althusser, Arendt, de Beauvoir, Du Bois, Fanon, Foucault, Freire, Horkheimer, Lorde, Said, Sartre, and others, in order to examine the current state of critical theory and ask how contemporary critical thought and practice function in these troubled times. We will approach these texts from a critical perspective: as objects of experimentation, of manipulation—of study in furtherance of our own critical projects. The idea, in essence, is to see how today we can use these critical texts. Our critical method in rereading these texts will be guided by the idea that we, critical theorists, are never “influenced” by authors or texts and are never “-ian”, but that instead we deploy and manipulate critical texts for our own political projects.

In approaching these texts again today, the idea will be to find new ways to use them, not to tear them down and criticize them for their faults, but to discover what we can do with them today. We will not care about what has been done with them in the past. We will look forward, to see what can be done with them now. We often refer to “Adorno” or “Foucault,” but they do not really exist and those terms do not have coherent meaning. Those terms are shorthand for their various written traces, often internally contradictory. It may well be that we typically anthropomorphize philosophers, books, or their oeuvre; but that is just human weakness, not a critical method. The only way to do justice to our critical task of writing, theorizing, and more importantly, engaging in critical praxis, is precisely to put these critical texts to work in furtherance of our own political projects. 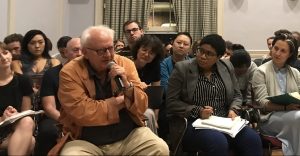