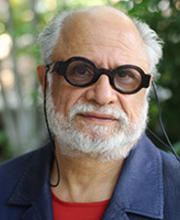 Homi K. Bhabha is an Indian English scholar and critical theorist. He is the Anne F. Rothenberg Professor of English and American Literature and Language, and the Director of the Mahindra Humanities Center at Harvard University.

Bhabha is the author of numerous works exploring colonial and postcolonial theory, cultural change and power, and cosmopolitanism, among other themes. These include Nation and Narration and The Location of Culture, which was reprinted as a Routeledge Classic in 2004 and has been translated into Korean, Spanish, Italian, Arabic, Serbian, German and Portuguese. A selection of his work was recently published in a Japanese volume. Harvard University Press will publish his forthcoming book A Global Measure, and Columbia University Press will publish his next book The Right to Narrate.