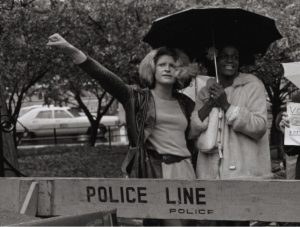 Variously called a riot, a rebellion, an uprising, the events at the Stonewall Inn down on Christopher Street in New York City in June 1969 were momentous. As historians note—and as Jack Halberstam underscores in their essay 13/13: Unbuild The World! —there had been political organizing much earlier, at least since the 1950s, a whirlwind of radical thinking going on, and many precursors to Stonewall, including riots in San Francisco and Los Angeles, and sit-ins in Philadelphia during the 1960s. But for New Yorkers whose view of the world is famously depicted in the New Yorker cover of March 29, 1976 by Saul Steinberg—and I count myself as one—the uprising at Stonewall sparked the revolution. Perhaps, as Edmund White suggests, in the same way that the taking of the Bastille became a symbol of the revolution that followed. Regardless of what sparked it, though, the social transformation was real and has had remarkable effects. Those early uprisings triggered what is often called “the Gay Revolution” and its progeny, including all the social movements to protect and advance the lives of LGBTQ people and to proliferate the categories within the meaning of LGBTQ—“to become numerous,” in the words of Che Gossett, who gave us the title for our seminar.

At Revolution 8/13, we will be reading and discussing the histories, interviews, and oral accounts of the LGBTQ Revolution, of ACT UP, of Stonewall and other uprisings, of the social movements for trans* lives and #BlackTransLivesMatter—and more generally, we will explore with Che Gossett and Jack Halberstam the possibilities of a future that is “genderless, gender variable, gender optional, gender hacked,” in Jack Halberstam’s words.