Soledad Brother and Blood In My Eye by George Jackson, Solitary by Albert Woodfox, Writings on the Short Corridor Collective, and The New Abolitionists: (Neo)slave Narratives And Contemporary Prison Writings by Joy James

Albert Woodfox became a Black Panther at Angola—the infamous plantation-prison in Louisiana—and founded, along with another revolutionary, Herman Wallace, the very first official chapter of the Panthers behind bars. Reading the works of revolutionary thinkers moved Woodfox to political action and helped him survive four decades of the most torturous conditions of solitary confinement known to humanity. “Reading was my salvation,” Woodfox writes in his remarkable memoir, Solitary. “Leaning against my wall in the cell, sitting on the floor, on my bed, or at my table, I read.”

Woodfox recounts the authors and books he read at Angola: George Jackson, Frantz Fanon, Mao, Eldridge Cleaver, Malcolm X, Mao, Marx and Engels, Fidel, Che Guevara, Ho Chi Minh, Kwame Nkrumah, Marcus Garvey, Steve Biko. His list reads like the bibliography for Revolution 13/13. Reading those works, Woodfox tells us, made him the person he is today. It also condemned him to four decades in solitary confinement—or rather, the racist state condemned him to four decades of solitary for reading those books. “I paid a heavy price,” Woodfox acknowledges. But he would not have had it any other way. When asked, as he often is, whether, looking back, he would have done anything different, Woodfox is adamant: “Not one thing.”

Reading, sharing, studying, discussing these prison writings and revolutionary books was formative as well for the members of the Short Corridor Collective at the SHU at Pelican Bay State Prison —both in terms of personal transformation and political action. Reading George Jackson and Eldridge Cleaver, Assata Shakur, and also Michel Foucault and Howard Zinn, transformed the men in the SHU—Sitawa Jamaa, Todd Ashker, Arturo Castellanos, and Antonio Guillen, who formed the Collective and were joined by Paul Redd and other men—leading to prison hunger strikes and legal actions that sought to abolish solitary confinement. They also generate new prison writings, like the “Agreement to End Hostilities” released by the hunger strikers in the Short Corridor, an agreement that sought to formalize solidarity between racial groups engaged in the hunger strike in opposition to the state’s attempts to fracture the movement. Paul Redd, one of the original signatories of that document, has spoken extensively about those political actions and hunger strikes.

Prison writing—works produced by authors while they themselves are incarcerated in jail or prison—have a special role and influence on readers, but perhaps especially on persons who are imprisoned. Professor Joy James, one of the world’s leading scholars and thinkers on prison writing, describes poignantly how contemporary insurrectionist prison writings “can question the very premises of rehabilitation, indicting the state and society, contextualizing or dismissing individual acts of criminality by nonelites, the poor and racialized, to emphasize state criminality or the crimes of elites.”

Many of the revolutionary authors who Woodfox and the Collective read wrote, themselves, from prison. Indeed, many of the worldly philosophers on our bibliography wrote from prison. Some, we have already discussed: Antonio Gramsci and his Prison Notebooks. Martin Luther King writing from the Birmingham city jail. Angela Davis’s letter from Marin County jail. Gandhi’s writings on Satyagraha. Other writers, we would like to read: Nawal El Saadawi’s Memoirs from the Women’s Prison. Nelson Mandela and his writings from prison, Conversations with Myself. Régis Debray, who became an associate of Che Guevara and Fidel, and his Prison Writings. Wole Soyinka’s The Man Died: The Prison Notes of Wole Soyinka, and others as well, such as Nehru. And there are many more to add to our bibliography—from contemporary prison writers going back in time: Mumia Abu-Jamal, Live from Death Row. Leonard Peltier, Prison Writings: My Life Is My Sundance. Oscar Wilde, De Profundis. Jean Genet, Our Lady of the Flowers. Peter Kropotkin, In Russian and French Prisons. Aleksandr Solzhenitsyn, Gulag Archipelago. Fyodor Dostoevsky, Notes from a Dead House.

Those prison writings and readings continue to shape the way we think and view the world today—and the way we act. The writer Darryl Robertson, who himself has produced remarkable writings behind bars, traces how these writings and experiences continue to influence contemporary artists and thinkers like Tupac Shakur and Nas. They guide us in our praxis and our ambitions. They change who we are. They also shed light on what happens in the darkest corners of our society— the places where oppression and torture are most easily hidden. Paul Redd’s essay from Pelican Bay State Prison’s SHU Windowless Cell Dungeon exemplifies this, as he gives a first-hand account of the torturous conditions in the solitary confinement unit to counter the state’s distortions and advocate for change.  As Professor Joy James observes, “when they emanate from the site of the noncitizen, from men and women in cages, regardless of their outlaw and disreputable status, they illuminate past, present, and future possibilities for the reinvention of democracy.”

Prison writing. Prison reading. These are the focus of our seminar Revolution 7/13. They raise a set of questions: How do these revolutionary books, written from prison, work, motivate, and speak to us? What is the difference with other classical critical texts, insofar as these works emanate from behind bars? What is the experience like to read prison writings in particular? And what is the experience of reading in prison, in solitary, or in the collectivity of detention? What is it like to encounter, intellectually and politically, an author like George Jackson in the prison? These are some of the questions we will address. 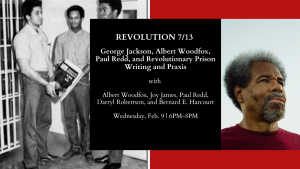