The Standing Rock protest against the Dakota Access Pipeline during 2016-2017 built on decades, or rather centuries, of resistance to ongoing colonial dispossession and dehumanization—or, in the judicious words of Leanne Betasamosake Simpson, to four centuries of “conquest, genocide, expansive dispossession, unfettered capitalist exploitation, heteropatriarchy, white supremacy and environmental apocalypse.” The long history—and its present manifestation—is indeed a travesty of justice and inhumanity. There are no other words to describe it.

We gather at Uprising 12/13 to explore and discuss the unique dimensions of what we are calling “Standing Ground,” in honor of Standing Rock, as a specific modality of revolt. Although it shares certain features with other forms of resistance that we have already analyzed—features such as nonviolence (which we explored in our session on Satyagraha), breaking silence (which we discussed in the nave of Riverside Church on the anniversary of Rev. Martin Luther King, Jr.), or social media and digitization with #NoDAPL (which we explored both in the context of the Arab Uprisings and #BlackLivesMatter), we encounter with Standing Ground/Standing Rock certain dimensions that are novel or more accentuated than elsewhere:

Let me begin here by elaborating a few of these dimensions of Standing Ground.

In Chris Hayes’s book, A Colony in a Nation, and in The Counterrevolution, there are undoubtedly suggestions that the American people today are rehearsing forms of colonialism—especially with the domestication of the counterinsurgency warfare paradigm—that were part of British and American (and French) history.

But with Standing Rock, these are not patterns that we need to unmask or unveil. These are not replications or reiterations of forms of colonialism from elsewhere. This is ongoing, long-lasting, originary colonialism. It is impossible to broach the topic of Standing Rock except through the framework of settler colonialism and anti-colonial struggles. As Jaskiran Dhillon writes, DAPL “must be viewed as the most recent incarnation of environmental harm that has found its legitimation and footing in colonialism and occupation.”

And as Nick Estes points out in his historical contextualization of the Standing Rock protests, this was not the first time that Standing Rock was the location of anti-colonial resistance. Standing Rock had been the site of the mass gathering of thousands of peoples from over 90 Native Nations in 1974, resulting in the founding of the International Indian Treaty Council. “At Standing Rock, more than 90 Native Nations from around the world built the foundations of what would become four decades of work at the United Nations and the basis for the 2007 Declaration on the Rights of Indigenous Peoples,” Estes writes.

The toll on individuals and communities has been devastating—and is documented well in Julian Brave NoiseCat’s article on the crisis of housing.

2. A form of encampment and resettlement

The original protest movements at Standing Rock were not so much an occupation, as in the forms of disobedience we studied with regard to Occupy Wall Street for instance or Nuits Debout, as they are a resettlement and encampment.

Standing Rock served as a gathering of sovereign nations and peoples, in an effort to contest the sovereignty of capital. The importance of it being situated on the land—on sacred land—is key to understanding its power. Its physicality and relation to territory was a central dimension of how it worked.

3/ A gathering of multiple sovereignties and Nations

At the same time, Standing Rock was not a gathering of individuals—as in Tahrir Square or Zuccotti Park—but an assembly of peoples and Nations, accompanied by individuals and supporters. There is a difference in the representation that challenges notions of leadership.

In our session on Foucault and Iran, we explored Foucault’s notion of “political spirituality,” which he identified in the popular uprising in Iran in 1978. Similarly, in our session on Satyagraha, we spoke of Gandhi’s spirituality as a foundation for his practices of non-violence.

At Standing Rock, though, we encounter a different form of political spirituality deeply tied to the environment and to earth. The spiritual relationship to water and land—the sacred nature of our environment—plays a key role in these struggles, and is often not sufficiently recognized by various actors intervening in the political situation. The fact that some of the encampments are referred to as “prayer camp” reflects this important dimension.

There may also be a differently gendered notion of spirituality. There is surely a gendered dimension to the violence, something that has also played a profound role in the movements for Black lives and the long history of violence against women of color. Jaskiran Dhillon, in her essay, and Leanne Simpson in her work as well, have emphasized the gendered dimension of the violence administered on Indigenous peoples, and the way that intersects with the environmental spoilage being inflicted on the Native Nations and planet earth.

Internal TigerSwan communications describe the movement as “an ideologically driven insurgency with a strong religious component” and compare the anti-pipeline water protectors to jihadist fighters. One report, dated February 27, 2017, states that since the movement “generally followed the jihadist insurgency model while active, we can expect the individuals who fought for and supported it to follow a post-insurgency model after its collapse.” Drawing comparisons with post-Soviet Afghanistan, the report warns, “While we can expect to see the continued spread of the anti-DAPL diaspora … aggressive intelligence preparation of the battlefield and active coordination between intelligence and security elements are now a proven method of defeating pipeline insurgencies.”

If ever there was a sickening illustration of The Counterrevolution, it is right here at Standing Rock: with the paramilitary attack on the protesters by militarized police deploying counterinsurgency tactics. The timeline of events that The Intercept put together is a damning history of counterinsurgency against our own citizens.

Standing Rock was mostly a defensive action against corporate interests, and governmental interests, pursuing their aims by means of counterinsurgency warfare. It was defensive, in the sense that it sought primarily to preserve against a history of genocide. Defensive as well, as Estes notes, because, “like our ancestors’ wars of the nineteenth century,” it aims “to protect water and land from inevitable spoliation in the name of profit.” Despite that, it was treated as an insurgency and attacked with counterinsurgency strategies.

Our readings for Uprising 12/13 link to an amazing array of resources, including the remarkable Standing Rock Syllabus put together by NYC Stands with Standing Rock, and the Teach-Ins on YouTube.

The struggles and revelations continue to the present. On April 7, 2018, Jon Herskovitz of Reuters news, reporting from Austin, Texas, revealed that “The Keystone crude oil pipeline leak in November [2017] in rural South Dakota was nearly double the original estimate, making it one of the largest U.S. inland spills since 2010.” This image is deeply worrying of exactly the kinds of environmental harms that Standing Rock protested. 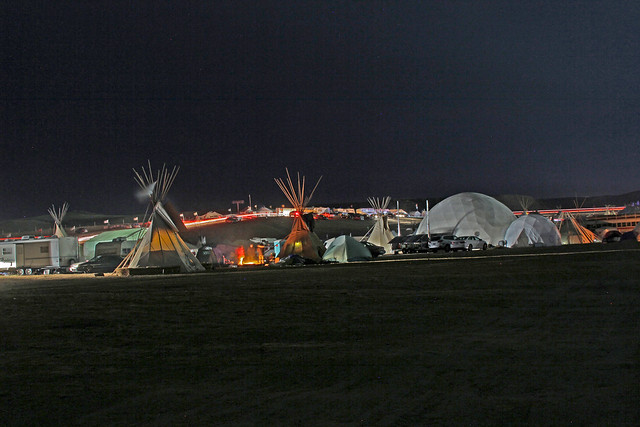 “Today, long after the cowboys, wagon trains and railroads have vanished, the daily fight to defend Indigenous dignity and hold on to what is ours continues.”