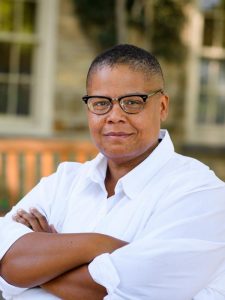 Keeanga-Yamahtta Taylor is a Professor in the Department of African-American Studies at Princeton University. She is author of Race for Profit: How Banks and the Real Estate Industry Undermined Black Homeownership, published in 2019 by the University of North Carolina Press, a semi-finalist for a National Book Award for nonfiction and a 2020 finalist for the Pulitzer in History. Taylor’s book From #BlackLivesMatter to Black Liberation, won the Lannan Cultural Freedom Award for an Especially Notable Book in 2016. She is also editor of How We Get Free: Black Feminism and the Combahee River Collective, which won the Lambda Literary Award for LGBTQ nonfiction in 2018.

Taylor is a scholar of racial inequality in public policy making and the various ways that Black communities have challenged or resisted these constraints. She writes extensively on race and politics, Black social movements and organizing, and radical activism and politics. Taylor is currently working on a project examining the retreat in the 1980s from the promise of civil rights, alongside the emergence of widening chasms in Black America along social, economic and political fault lines.

Taylor is among the inaugural cohort of Freedom Scholars funded by the Marguerite Casey Foundation and Group Health Foundation. Taylor has been appointed as a Distinguished Lecturer for the Organization of American Historians by the Organization of American Historians. She is a 2021 recipient of the Guggenheim Fellowship. In 2021, she was also awarded a MacArthur Fellowship (a “Genius Grant”). Taylor is a contributing writer for The New Yorker.