At the end of his remarkable, improbable life, Malcolm X was on the cusp of a reinvention that might have been even more significant than his conversion in prison from criminal predation to religious piety. Although he rose to prominence preaching the bleak, racialist metaphysics of Elijah Muhammad and the Nation of Islam (NOI), which depicted whites as “devils by nature,” in March 1964 Malcolm defected from the Nation and converted to Sunni Islam. Charging Muhammad with the sexual exploitation of his teenage secretaries, and the NOI with corruption, criminality, and idolatry, Malcolm pushed a dangerous feud toward its deadly conclusion.

As assassins from the NOI closed in, the NYPD and FBI infiltrated both Muhammad’s group and Malcolm’s nascent Organization of Afro-American Unity (OAAU) with undercover police and paid informants, seeking to exacerbate sectarian hostilities. Meanwhile, Malcolm traveled frenetically around the globe, making the hajj to Mecca as part of his conversion and conducting subversive diplomacy on behalf of oppressed African-Americans, pleading for newly decolonized nations to bring charges in the United Nations for the United States’ systemic abuse of their human rights. While navigating the ire and surveillance of CIA operatives, Malcolm tried, speech by speech, to cobble together a political philosophy for Black militants out of revolutionary Black nationalism, Pan-Africanism, anti-imperialism, and a populist critique of Black elites….

To continue to read, please find the full article here at the New York Review of Books. 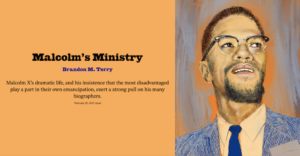 The full article is available here.