Marianne Hirsch is William Peterfield Trent Professor of English and Comparative Literature at Columbia University and Professor in the Institute for Research on Women, Gender, and Sexuality. 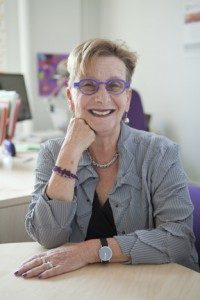 Marianne Hirsch’s work combines feminist theory with memory studies, particularly the transmission of memories of violence across generations. Her recent books include The Generation of Postmemory: Writing and Visual Culture After the Holocaust (Columbia University Press, 2012), Ghosts of Home: The Afterlife of Czernowitz in Jewish Memory, co-authored with Leo Spitzer (University of California Press, 2010), Rites of Return: Diaspora, Poetics and the Politics of Memory, co-edited with Nancy K. Miller (Columbia University Press, 2011). She co-edited, with Diana Taylor, the Summer 2012 issue of é-misferica on “The Subject of Archives.” Other recent publications include Family Frames: Photography, Narrative, and Postmemory (1997), The Familial Gaze (1999), Time and the Literary (2002), a special issue of Signs on “Gender and Cultural Memory” (2002), Teaching the Representation of the Holocaust (2004), and Grace Paley Writing the World (2009). She is currently at work on a co-authored book with Leo Spitzer, “School Photos in Liquid Time” and on a series of essays about memory and mobility.

Marianne Hirsch is a past president of the Modern Language Association of America, a former editor of PMLA and the recipient of fellowships from the Guggenheim Foundation, the ACLS, the Mary Ingraham Bunting Institute, the National Humanities Center, the Bellagio and Bogliasco Foundations, and the Stellenbosch Institute for Advanced Studies. She has served on the MLA Executive Council, the ACLA Advisory Board, the Board of Supervisors of The English Institute, and the Executive Board of the Society for the Study of Narrative Literature, and is on the advisory boards of Memory Studies and Contemporary Women’s Writing. She is one of the founders of Columbia’s Center for the Study of Social Difference and of its global initiative “Women Creating Change.”