Reparation. Chance. Labyrinth. The insightful presentations of Denis Hollier, Rosalind Morris, and Anthony Vidler focused our attention on these three key concepts in Bataille’s writings on Nietzsche. By reflecting more on the three concepts, it may be possible to connect them, draw some critical insights, and open a few doors.

Reparation to Nietzsche. Bataille sought to recuperate Nietzsche on evil from the Nietzsche of the will to power. He suggests as much in the final passages that he wrote Sur Nietzsche, which are in effect his preface. Bataille’s engagement with Nietzsche, he tells us, was intended to set the record straight: We should not read Nietzsche as an advocate of some collective will to dominate others, of parties or partisanship or group domination, but instead as someone who struggled at the personal, ethical level with the task of overcoming notions of good and evil. Bataille wrote:

“Nietzsche is believed to be the philosopher of the ‘will to power,’ to have presented himself as such, and he has been received as such. But I think he is instead the philosopher of evil. It is the attraction, the value of evil that, it seems to me, gave meaning in his eyes to what he was saying in relation to power.” (SN, 16; ON, xxiv).

On his view, the idea of “will to power” as part of a political practice of partisanship is entirely irreconcilable with Nietzsche. This derives, in part, from the anti-fascist reading Bataille had developed earlier in the Acéphale collective, but more than that, it rests on a curiously anti-collective position that becomes clear in 1944. Bataille homes in on a passage from The Gay Science where Nietzsche, speaking as the “gâte sauce” or “spoiler,” admits that he “spoils for everyone the taste he has for his party.” (SN 16)

Bataille reads Nietzsche here as speaking on his own behalf—which is remarkable and fascinating because it strikes at the very heart of Bataille’s own yearning for collectivity. It scratches his own scab.

Now, this, I would argue, is the central productive tension in Bataille’s writings and in the work of so many of us, critical thinkers, who spoil our own parties.

Stop and think for a moment about the centrality of this tension for Bataille, someone who is wracked by such a deep desire for a fraternal order, for a collectivity, for an atheological substitute to divine love, and who is constantly spoiled by the critical questioning of that very desire itself, always and forever. What might this tell us of our own critical practice? Are we too doomed to agonize, to struggle, to fail in the constant critiquing of our own collective endeavors? Are we destined to the same extreme experience of anguished thought and being? Are we caught in an endless struggle? Is this our fate: to bleed in critical thought? And how come it feels so familiar to me? This constant, endless yearning for solidarity that never withstands the uncompromising critical impulse, not even for a moment. Are we, sympathetic readers of Nietzsche, doomed to the abyss of critique?

To my mind, these are not limit experiences. They are not transgressive. They are simply painful. So painful that there is little place to turn. And this resonates with Bataille’s work as well. The struggle there becomes so relentless, there is practically nowhere to turn—except, in the end, to chance. We meet there, Bataille and I, without ever having met on our journey together.[i]

It is to chance, to the roll of the dice, to an arbitrary game that Bataille ultimately turns:

Chance. The roll of the dice. The game – le jeu. We end there, in pain, bloody. By default, as I had said in Postmodern Meditations on Punishment, not otherwise. We end there by accident.[iii]  “Nietzsche wrote ‘with his blood.’ Whoever critiques or better yet, experiences him can only do so bleeding in his turn.” (SN, 15; ON, xxiv).

As Rosalind Morris reminds us, the subtitle of Sur Nietzsche is:  Volonté de chance. “The Will to Chance.” (Although it was not retained in the English translation).

From the will to power to the will to chance. It is there, ultimately, that the reparation leads.

Reparation. To set the record straight.

In the process, though, it becomes clear that we may need to set the record straight on Bataille.

Bataille is often collapsed into Sade as the personification of extreme transgression and limit experiences. But that is far from clear from a close reading of Sur Nietzsche. As he writes, himself, his animating tension “differs little from the passions of which the heroes of Sade are consumed, and nevertheless is also close to that of martyrs and saints…” (SN, 11; ON, xix). Saints, he adds… And as he explains very clearly, what he opposes, what he resists is coercion. (SN, 16; ON, xxv). Bataille by no means simply embraces torture, sadism, or coercion. In passages, Bataille rails against anarchism, against the apology of the criminal, about the police and the underworld. “No one is more inclined to torture or to cruelly serve the apparatus of coercion,” he writes, “than men without faith or law” (SN, 16)—“who hold nothing sacred.” (ON, xxv).  No, Bataille does not embrace evil for its sake, but rather as a means to oppose coercion:

Bataille is working with Nietzsche’s conception of evil, trying to actually get us beyond it somehow. That is his struggle. The question of us, then, is why we so adamantly want to read Bataille as pure transgression, pure evil? What does that tell about us?

Foucault writes, in “A Preface to Transgression,” “since Sade and the death of God, the universe of language has absorbed our sexuality, denatured it, placed it in a void where it establishes its sovereignty and where it incessantly sets up as the Law the limits it transgresses.”[vi]

When I read Bataille and then these words, I am struck. Especially struck by the length of federal sentences for sexual deviations. But I will discuss those at a later date. 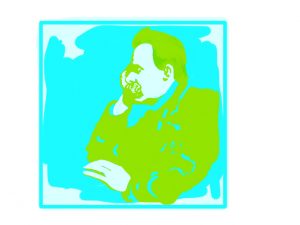 [ii] « Only my life, only its ludicrous resources, only these made a quest for the grail of chance possible for me. Chance, as it turned out, corresponded to Nietzsche’s intentions more accurately than power could. Only « play » gave me the possibility of exploring the far reaches of possibility and not prejudicing the results, of giving to the future alone and its free occurrence the power usually assigned to choosing sides (which is only a form of the past).”

[iii] I feel this accident with all its weight, having met Bataille’s Sur Nietzsche only now.

[v] ‘Personally, and with no illusions concerning the impact of this attitude, I am opposed to all form of coercion – but this doesn’t keep me from seeing evil as an object of moral exploration. Because evil is the opposite of a constraint that on principle is practiced with a view toward good.”

[viii] Ibid.  “We know this today: Bataille is one of the most important writers of his century […] We owe Bataille a big part of the moment we are in; but what remains to be done, what has to be thought, what has to be said, this is without any doubt still due to him and will be for a long time.”