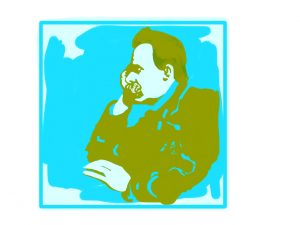 The stimulating interventions of Barbara Stiegler, John Rajchman, and Mick Taussig at last night’s seminar, Nietzsche 4/13, raised a number of challenging issues regarding Gilles Deleuze’s reading, interpretation, and “use” of Nietzsche—regarding both the Deleuzian Nietzsche and the Nietzschean Deleuze. In this epilogue, I would like to address three loose ends: (1) the turn to law in Deleuze and Foucault; (2) the relation between the Deleuze of the 1960s and the Deleuze of the 1970s; and (3) the magic and sorcery in Deleuze and Guattari’s Thousand Plateaus.

I.  On the question of law

In response to questions about the political dimensions of the Deleuzian Nietzsche, John Rajchman urged us to explore further the legal writings of both Deleuze and Foucault from the 1970s, and also to relisten to Deleuze’s discussion of “G,” for Gauche, in his Abécédaire.

A lot of new work is being done on Foucault’s writings on law, though slightly less on Deleuze’s. The interest in Foucault’s writings on law are due to the very recent publication of his three most “legal” lecture series—Penal Theories and Institutions (1972, Collège de France), The Punitive Society (1973, Collège de France), and Wrong-Doing, Truth Telling: The Function of Avowal in Justice (1981, Louvain). Several scholars had been working on the topic previously, especially Ben Golder (see his Foucault and Law, 2010), Peter Fitzpatrick (with Golder, eds., Foucault’s Law (2009), and Mariana Valverde (see recently her review of The Punitive Society). The recent publication of these lectures and the availability of his extensive reading notes at the Bibliothèque nationale de France (which reveal that he conducted, during the early 1970s, a full-blown study of law from the Roman period to the 19th century), demonstrate Foucault’s interest in legal forms. Foucault elaborated, in those years, a series of analyses on truth and legal forms, from the test or ordeal, to the inquiry, to the examination, and ultimately to the prison and detention as a unique legal form associated with the production of a coercive society in the 19th century—what he called a “punitive society” or later a “disciplinary society.” Foucault’s analysis of illegalisms (from The Punitive Society through Discipline and Punish), as well as his exploration of repressive judicial state apparatuses in Penal Theories and Institutions, and the juridical avowal in Wrong-Doing, Truth-Telling, are also rich sources of material for such an analysis (as we explored last year in Foucault 2/13 and 3/13, among others).

The differences, though, between Foucault and Deleuze can be stark. For instance, Deleuze willingly writes about “Law” with a capital “L.” So, for instance, in his Foucault, he writes that “modern subjectivity rediscovers the body and its pleasures, as opposed to a desire that has become too subjugated by Law” (Deleuze, Foucault, p. 105 [English ed.]). As Rajchman suggests, this “notion of The Law” is one that “Lacan had linked to Levi-Strauss’ idea of a Symbolic Order in kinship as in exchange,” and, as Rajchman emphasizes, one that Foucault had rebelled against, arguing instead that “power is positive or productive, not simply exclusionary.” This is worth emphasizing, because it represents a potentially sharp difference between Foucault and Deleuze on the matter. Though Foucault was immersed in the analysis of legal forms, he would not refer to “The Law” and rarely discussed “law” (droit), viewing law more (as critical legal scholars would later) as a purely rhetorical layer imposed ex post on the struggles or civil wars that ultimately resolve political conflict. As François Ewald and I write in our course context to Penal Theories and Institutions, “Foucault, in the first place, speaks little of ‘law.’ It is not from law that we can derive the character of juridical and judicial institutions. Instead, one needs to start from the institutions, from the ‘acts of justice.’ Foucault makes a very precise distinction between justice, the juridical, the judicial, and law.”[i] That course context articulates the different juridical dimensions of Foucault’s analysis (justice, the juridical, the judicial, acts of justice, etc.)[ii] And, as we suggest there, “Law comes in late, it’s a discourse after the fact. It serves to recode institutions, to legitimate des coups de force It’s an instrument of power, an instrument in relations of power.”[iii] And, as we suggest, Foucault’s theory of law serves as a “critique of law” that needs to be read alongside the French movement of the “Marxist critique of law” and the American movement of Critical Legal Studies.[iv] But these are just preliminary indications.

Incidentally, as was mentioned at the end of the seminar, Daniela Gandorfer and Nofar Sheffi recently organized a conference called Synesthesia of Law at Princeton University that explored precisely the question of critical interdisciplinary approaches to law–with a very Deleuzian intervention by Andreas Philippopoulos-Mihalopoulos especially. Just as Rajchman had urged last night, the conference panelists included artists (Bradley McCallum, Chitra Ganesh, Miriam Ghani, and Carey Young), critical legal scholars and critical race theorists (Yishai Blank, Peter Goodrich, Andreas Philippopoulos-Mihalopoulos, Kendall Thomas, Patricia Williams, and Mikhaïl Xifaras), sociologists and anthropologists (Ann Stoler and Mariana Valverde), legal historians (Jesús Velasco), media and visual theorists (Christian Biet, Allen Feldman, and Eyal Weizman), and literary scholars (Eduardo Cadava and Thomas Levin), among others. Many interventions focused on the question of the critical sensual experience of the law and on the legal regulation of senses; others tried to develop a critical-synesthetic approach to law. Joseph Lawless is currently working on a synthetic piece that will link several of the interventions (I will link to it when it is up). Anyone interested in pursuing the conversation that John Rajchman began on Deleuze, art, and law, might want to begin with this remarkable conference.

Both Barbara Stiegler and John Rajchman drew important distinctions between the Deleuze of the early 1960s, marked especially by his writings on Nietzsche in 1962 and 1965, and the Deleuze of the 1970s, marked by his joint authorship with Félix Guattari of Anti-Oedipus and A Thousand Plateaus. Stiegler suggested that the misreading of Nietzsche that she identified in the earlier Deleuze—having to do with Deleuze’s erasure of the Apollonian (his “banishing Apollo”) and his excessive rejection of the negative (“the constant opposition of active joy and reactive suffering”)—did not bleed into the later Deleuze and Guattari writings. Rajchman emphasized the “change in attitude” that we already see in 1972-73 in La pensée nomade.

The question here is whether there is such a break and what that would tell us about critique. For as you will recall, the Deleuzian Nietzsche of the 1960s is the focal point of critique: by contrast to Kant, who did not achieve “real critique” on Deleuze’s reading, Nietzsche inaugurated the critical gaze by focusing on meaning and value—at least, as argued here.

Does Deleuze move away from that? That’s an important question that we should explore further. My tentative answer is no—not fundamentally. As Rosalind Morris reminded us last night, right in the middle of Anti-Oedipus, about half way through, Deleuze and Guattari discard Marcel Mauss and return to Nietzsche’s Genealogy of Morals. Morris raised an important question about what the implications were for sociality and the political—in response to Rajchman’s suggestion that Deleuze’s main political intervention was to “rethink what politics is.” For my part, I think, this suggests the continuity with the earlier Deleuze, who portrayed Nietzsche as founding critique. If this is true, then what we need to explore is the continuities in relation to critique—and variations, in order to excavate the critical potential of the Deleuzian Nietzsche.

Mick Taussig also drew our attention to the chapter on becoming (“Becoming-Intense, Becoming-Animal, Becoming-Imperceptible”) in A Thousand Plateaus, and especially the section “Memories of a Sorcerer,” or what Taussig called “becoming a sorcerer.” He suggests that the book as a whole can be interpreted as a form of sorcery or magic—“the skilled revelation of skilled concealment,” as he defines magic. As Taussig showed last night, the anthropological tradition from Boas to Lévi-Strauss has always been obsessed with revealing the fraud, fakery, or sham nature of shamanism (the words sham and shamanism share no real etymology, except in our imagination). But sorcery and magic, of course, persist. Widely. And so, the question is, then, what can this tell us about their political potential? What is the role of “the skilled revelation of skilled concealment” in bringing about political change?