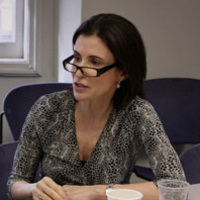 Linda M. G. Zerilli is a leading critical thinker and author in the areas of feminist theory, political theory, and Continental philosophy. She is the Charles E. Merriam Distinguished Service Professor of Political Science and the College at the University of Chicago, and currently serves as Faculty Director of the University of Chicago Center for the Study of Gender and Sexuality.

Professor Zerilli is the author of Signifying Woman: Culture and Chaos in Rousseau, Burke, and Mill (Cornell, 1994); Feminism and the Abyss of Freedom (Chicago, 2005), and articles on subjects ranging across feminist thought, the politics of language, aesthetics, and Continental philosophy. Her current book project is titled A Democratic Theory of Judgment and is forthcoming with the University of Chicago Press.

Professor Zerilli is a visiting scholar the Columbia Center for Contemporary Critical Thought, where she is currently teaching a seminar on “The Idea of a Critical Political Theory.” She will also be presenting the first chapter of her forthcoming book at the Political Theory Workshop, co-sponsored with CCCCT, as well as her article “The Turn to Affect and the Problem of Judgment” at the Columbia Institute for Research on Women, Gender, and Sexuality. We are delighted to have Professor Zerilli with us at Columbia University.