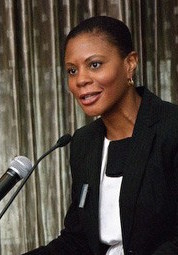 Alondra Nelson is professor of sociology and gender studies and Dean of Social Science at Columbia University, where she has served as director of the Institute for Research on Women, Gender, and Sexuality. She is Chair-elect of the American Sociological Association Section on Science, Knowledge and Technology.

Her most recent book, The Social Life of DNA: Race, Reparations, and Reconciliation after the Genome (Beacon Press, 2016), traces how claims about ancestry are marshaled together with genetic analysis in a range of social ventures. She also takes up these themes in several publications that are among the earliest empirical scholarly investigations of direct-to-consumer genetic testing: “Bio Science: Genetic Ancestry Testing and the Pursuit of African Ancestry” (Social Studies of Science 38, 2008), “The Factness of Diaspora: The Social Sources of Genetic Genealogy” (in Revisiting Race in a Genomics Age, Rutgers University Press, 2008), and “DNA Ethnicity as Black Social Action?”(Cultural Anthropology 28, 2013).

Nelson is an interdisciplinary social scientist whose research focuses on how science and its applications may shape the social world, including aspects of personal identification, racial formation, and collective action. In turn, she also explores the ways in which social groups reject, challenge, engage and, in some instances, adopt and mobilize conceptualizations of race, ethnicity, and gender derived from scientific and technical domains. In 2014, she began new ethnographic research that examines grassroots responses to the STEM-field crisis.