By Isadora Ruyter-Harcourt (at the Centro in Rome)

As we examine, in the seminar this week, the “punitive society” from the eighteenth century to the present, I thought it might be interesting to step back to the Roman era to explore the Carcer, otherwise known as the Mamertine Prison, built in Rome beginning in the seventh century BCE, and the practices that surrounded that punitive institution. 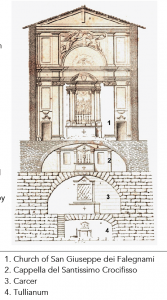 By way of background, there are two different histories of the carcer—one given to us in ancient literary sources and another given to us by modern scholars, gleaned from archaeological evidence. Livy wrote that the carcer was constructed in 630 BCE under King Ancus Marcius, as a response to the growing population on the Aventine Hill and the resulting growth in crime. “When, as a result of this rapid growth in population, opinions grew confused over the right and the wrong way to do things, clandestine crime began to appear. In response, a prison was built overlooking the Forum in the middle of the city, countering the growth in daring with the threat of incarceration.” Livy, History 1.33.8 (Aicher, p. 70) The carcer consisted of two ancient cells behind a travertine wall, one on top of the other. The upper cell was trapezoidal, and, according to Claridge, probably one of several dug into the hill at the same level, exploiting old subterranean stone quarries. (That’s number 3 on the plan to the left).

Festus writes that in 550 BCE King Servius Tullius built the Tullianum, the second, lower chamber underneath the first prison cell. (That’s number 4 on the plan). However, scholars generally agree that this lower cell dates to no earlier than the third century BCE and that it was built as a prison because of the quality of the masonry and the use of Alban stone (peperino marble). (Wilkins, p. 105) The Tullianum has a circular hole in the roof, with 7 meters of diameter. This was the death cell, where convicted enemies of the state awaited execution and were strangled or decapitated. The name Tullianum is thought to come from the Latin tullius, which means spring of water, and may refer to a spring of water that drained through it. (Claridge, p. 163) There was a drain in the Tullianum that led to the Cloaca Maxima, which was used for disposing of the corpses of the executed. (Wilkins, p. 106) Sallust gives a vivid description of the Tullianum: “There is a part of the prison which is called the Tullianum, where you ascend a short way on the left. The Tullianum is sunk into the earth about 12 feet and is constructed of stone walls on all sides; above this is a room with a ceiling of vaulted stone. Foul from neglect, darkness, and stench, it is an altogether terrifying sight.” Sallust, War against Catiline 55. (Aicher, p. 70) We learn from an inscription that in 39-42 CE the travertine wall was restored by Rufinus and Nerva, Suffect Consuls (see inscription below) The façade inscription reads:

Gaius Vibius Rufinus, son of Gaius, and Marcus Cocceius Nerva, in accordance with a decree of the Senate.

It is important to remark that Livy places the original location of the carcer in the middle of the city, and overlooking the forum. Indeed, the carcer was not only used as a physical space where convicted enemies of the state could be detained and executed, but also as a metaphorical reminder of the power of the Republic or the Emperor, and its placement in the city was significant. It was the physical manifestation of power—the right of the Republic or Emperor to impose the law in the most severe fashion. 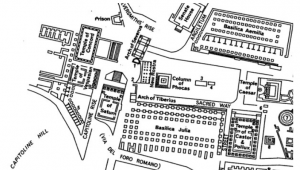 One way that this power was manifested was during the triumphal procession. The carcer was an important stop along the  procession. The purpose of the triumphal procession was to demonstrate the dominance of the victor over the enemy, and often captives of war were part of the procession, and the leader of the enemy was the highlight. The public execution of the enemy to the state, whether that person was the leader of an enemy people or a Roman citizen who was charged with treason, was made into a spectacle for the whole populace to see. The carcer was a part of the political aspect of the forum. It was located near the forum because that was the center of Roman life and politics.

In Against Verres, Cicero writes, “Those who celebrate a triumph temporarily stay the executions of the enemy’s leaders so that the people of Rome can witness the beautiful spectacle and the reward of victory when these men are paraded in the triumph. But when the wagons in the procession begin their turn from the Forum to the Capitoline, they order the captive leaders to be led into the Prison [Carcer] to their death. Thus does one same day put an end to both the command of the victorious general and the life of the defeated foe.” (Cicero, Against Verres 5.77. Aicher, p. 55.) Josephus confirms in his description of Vespasian’s triumph of 71 CE that the leader of the enemies were executed at the carcer. (Josephus, The Jewish War 7.132-155. Aicher, p. 57)

There are several famous instances in which the carcer was used—two will serve here as illustrations, the incarceration and execution of Vercingetorix and of the Catilinarian conspirators.

First, the leader of the Averni tribe of Gauls, Vercingetorix, surrendered to Caesar after the battle of Alesia in 52 BCE. He was incarcerated and then forced to participate in Caesar’s triumphal parade of 46 BCE. At the end of the parade, he was lowered into the Tullianum through a circular hole by a rope, with his executioner, and decapitated in the dark. (Deutsch, 101; Plutarch, Life of Julius Caesar, section 27; Cassius Dio, Roman History, book 40, section 41). Here the carcer was being used to assert the dominance of the Republic over people who they considered “barbarians.” However, interestingly, this also allowed the prisoner to die with a certain amount of dignity that was not even given to the lower class.

In the Roman Republic, Roman citizens were granted certain protections in the law. They could be executed for serious crimes like treason, but the only method of execution that was considered appropriate for a citizen was decapitation. In this way, citizens were allowed to die in a dignified way that was considered appropriate for their social status. By contrast, slaves and non-citizens could be sent to the beasts, be forced into gladiatorial combat or sentenced to die working in the mines, or they could be crucified. As citizenship expanded, it became less valuable as a marker of social status. In 212 CE Caracalla extended citizenship to practically all inhabitants of the Roman Empire. The category of honestiores (upper-class) and humiliores (lower-class) replaced the citizen/non-citizen distinction, and honestiores were afforded protections that had previously been restricted to citizens. So in allowing enemies of war to be executed by decapitation in private, the Romans were almost treating them with the same level of respect as they treated citizens or honestiores.

The second illustration occurred in 63 BCE, when Cicero as consul tried the Catilinarian conspirators. They were found guilty but without giving them access to their right to appeal, Cicero wisked them off to the carcer and executed them. As Sallust writes in War against Catiline, “Cicero, as consul [in 63 BCE], decided to carry it [the death sentence] out before nightfall to forestall any further developments, and ordered the prison officials to prepare everything necessary for execution. After stationing guards around, he personally led Lentulus into the prison; praetors escorted the other conspirators. […] Into this chamber [the Tullianum] Lentulus was lowered, and the executioners of those who commit capital crimes did as they were told and strangled him. Thus did a patrician of the distinguished family of the Cornelii and former consul in Rome end his life, in a manner worthy not of his birth but of his character and his own deeds. Cathegus, Statilius, Gabinius, and Caeparius died in the same way.” Sallust, War against Catiline 55. (Aicher, p. 70)

It is interesting to note that enemies of the state were afforded the same dignity and privilege of being executed in the same way that citizens were allowed to be. They were allowed a private execution by decapitation or strangulation. In addition, the way that the Catelinarian conspirators were treated, being executed in the Tullianum, placed them on the same level of Vercingetorix and other foreign enemies. This may be an intentional juxtaposition by Cicero, because it almost strips them of their citizen status and gives Cicero more validity in treating them the way that he did. These cases point to the complex political and social connotations that were connected to the carcer. It served not merely a prison—though not for penal servitude or correction, naturally, but for detention and execution—but a symbol of power, a political institution, and an expression of social order.

Wilkins, Ann Thomas. “Sallust’s Tullianum: Reality, Description, and Beyond.” Ed. Sheila K. Dickinson and Judith P. Hallett. Rome and Her Monuments: Essays on the City and Literature of Rome in Honor of Katherine A. Geffcken. Wauconda: Bolchazy-Carducci Publishers, Inc., 2000. 99-124.